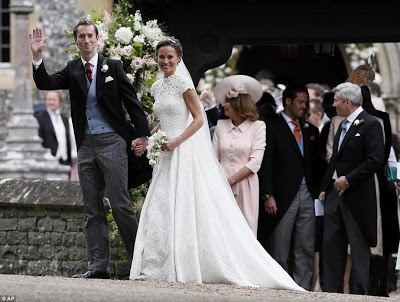 Kate Middleton’s younger sister Pippa, 33, this morning arrived in St. Mark’s Church for her wedding to James Matthews. She wore a wedding dress designed by Giles Deacon with a veil by Stephen Jones, a Maidenhair Fern tiara, and Manolo Blahnik ivory satin shoes.

The bride arrived at the church in an open-top car alongside her father, Michael Middleton. Prince George and Princess Charlotte served as page boy and bridesmaid. Prince William, and Harry, Kate Middleton, Roger Federer and many more were at the wedding.

See photos from the wedding……

Pippa Middleton and James Matthews signed the dotted lines and are now legally a married couple. The newlyweds were all smiles and looked so in love as they left the private ceremony at the church in Englefield hand in hand.

They headed for the reception which held in the garden of her family home.

Her sister, Kate Middleton, the Duchess of Cambridge, could not return the favour by being her maid of honour but she was kept in charge of coordinating the flower girls and the pageboys. The first half of the event turned out successful partly due to her help with the kids.
More photos below….

#PippasWedding – The Duchess Of Cambridge’s Younger Sister,Pippa Middleton weds James Matthews {Photos} was last modified: May 20th, 2017 by Arinze Ago