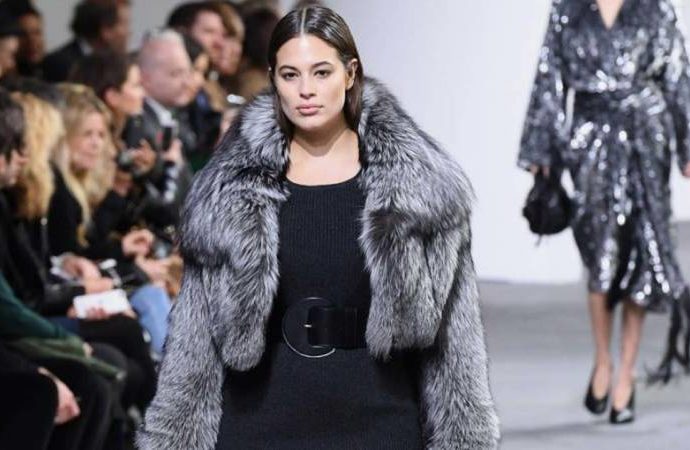 Ashley Graham on Wednesday became the first plus-size model to walk on the New York runway for Michael Kors, who unveiled a collection full of opulent fur coats and monochrome looks.

Graham, the 28-year-old American and self-proclaimed body activist who this month became the first plus-size model to appear on the cover of Vogue, took to the catwalk in a black dress slashed to the thigh and belted at the waist with a cropped grey fur coat.

The 57-year-old New York designer was a major draw on day six of fashion week in the Big Apple, pulling in actress Blake Lively and her husband, the Canadian actor Ryan Reynolds, as well as Vogue editor-in-chief Anna Wintour.

Models sashayed down the runway to the strains of Eurythmics hit “Sweet Dreams” — performed live by a string ensemble wearing fur coats, evening dresses and metallics.

There were a succession of one-color outfits in chocolate, camel and olive, slouchy suede boots, asymmetrical cutaways to reveal the thigh and rich dresses in molten silver and gold.

It was a very New York look: draped dresses, skirts and blouses contrasted with tailored jackets and a defined waist to present what Kors called “covered-up sexiness” and “urban takes on languid kimonos and sarongs.”

Graham, who is followed by 3.2 million people on Instagram, shot to fame last year when she became the first plus-size model on the cover of the annual “Swimsuit Issue” of magazine “Sports Illustrated.”

Her presence suggested that Kors had changed his attitude about size diversity on the catwalk, having told USA Today last September that it was not logistically possible to feature them on the runway.

At The Opening Of Royal Root Fabrics...