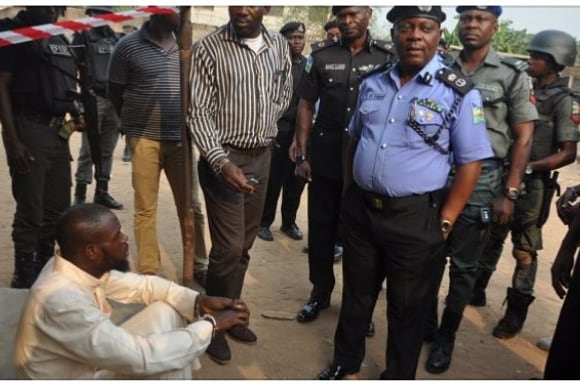 A mild drama ensued on Thursday at the Ondo state police command headquarters as a middle-age man allegedly held for the murder of his boss protested that he should not be paraded alongside suspected armed robbers and other criminals insisting that his case was just a minor one of two-fighting.

However, unknown to the suspect, Adewale Adegoroye, the fight which landed him in police detention had turned into alleged murder as he later found out that the victim died as a result of injuries sustained during the fight.

According to the state commissioner of police, Mr Gbenga Adeyanju, during the parade of the suspect and other criminals at the command today, the suspect allegedly attacked one Akin Akinmulero, the manager of Ondo Multipurpose Cooperative Union by stabbing him with a knife yesterday morning.

The suspect, according to the CP, who is also a staff of the union was said to have snatched the sum of N700,000 from the victim after stabbing him. The victim was said to have been rushed to the State Specialist Hospital where he later died.

The suspect, who was in shock after hearing about the death of his boss when journalist wanted to interview him, narrated his side of the story.

He said he started working with the victim last year September and he has not received any salary since then.

He also said that he was hungry and when he learnt that the man was going to the bank to collect money, he went to block him.

He said when he met him and told him to give him part of the money he was being owed, the man refused and they started fighting and he collected the money from him after stabbing him with a knife and was running away with the money.

He was held by people at the scene and handed over to the police.

The two men, it was learnt had been working together for sometime. The deceased was said to have at a time left Akure, relocated to Lagos and even returned to ask the suspect to come and work with him in the cocoa cooperative union.
In tears, the suspect who said he only took the action because of hunger said he did not know it would lead to the victim’s death.