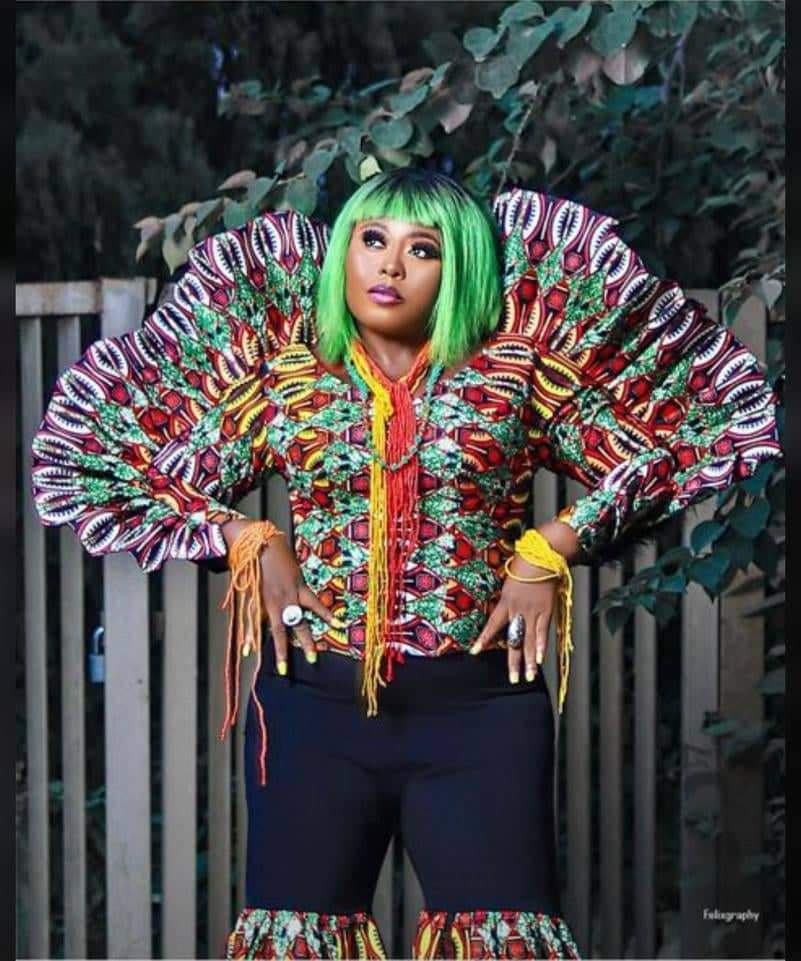 My name is Temitope Duker, a filmmaker, radio host, talent manager, and currently, the Festival Director for the Abuja international film festival amongst other endeavors I find myself modestly in … I am an indigene of Lagos island, Olowogbowo area to be precise,in Lagos.

I am a graduate of Journalism and book publishing respectively from the Nigeria Institute of Journalism and Yaba College of Technology. I then proceeded to obtain a Masters in Business Administration with a specialty in Marketing from Crawford University, Ota, Ogun state.
I am a wife and a mother of 3.

Tell us about your new film.

Given my research, I found out that a lot of relationships go through turmoil most especially when there are financial challenges. We have heard people say love is sweeter when there is money .
Again, the story is actually to create a balance tin relationships as against what is believed by many that abuse can be caused in several forms, it could be physical, emotional , verbal , psychological and what a view and mostly inflicted on the women.

The story shows that it can be inflicted on either of the parties as against the common believe that women are mostly vulnerable .. statistics have also showed that there is a prevailing rate of the male gender also in the same situation.

The story basically speaks to couples to treat each other with love, care, and understanding and stand by one another in difficult times

Are you an actress or a Producer Filmmaker?

I rather you refer to me as a filmmaker. I have produced quite a number of films and television programs alongside my husband and business partner.
Currently, I have caught my teeth in directing, and in recent times I have leaned more towards the technical part of production..I love to give life to imaginations so I would prefer to be referred better to as a filmmaker or a film director.

Recently, I produced and directed Twisted, Ifetokoro, Jerry’s escape amongst some other jobs soon to be released.

How did you get into the movie industry?

Interestingly enough, whilst growing up, my dream was to be a Journalist , precisely a War Correspondent. Hence, I went to journalism school. As fate and life would have it, I met my then boyfriend and who is now my husband, Fidelis Duker, who was already practicing film production.
I visited him a number of times on film sets and frequenting his office, seeing actors and actresses and production hand I got caught or better put I got stung by the film bug and gradually I think my first experience proper was when I played a waka pass role in one of his films, Nemesis and from then I haven’t looked back.

Tell me what you have been able to do so far?

I want to believe you are asking me what I have done as regards my career so far.

Well, as previously mentioned I have mostly been in the industry,quietly.
Well, I was very instrumental to the creation of the first-ever Reality tv show for children in Nigeria titled Kids Alone.I was the producer of 3 drama serial and series on national television and syndicated as well across the country titles , Images, Eldorado and Girls next door, simultaneously, which i worked on, along side my partner. I have worked on several film productions in different capacities from scripting , makeup, costuming and wardrobe, producing and directing, behind the scene, majorly .. and a few features as an actor.

Interestingly enough, I appeared in like 2/3 of African Magic original series and production amongst other features, though mostly minor roles.
I have also been involved in film festival management and I also belong to the network of festival managers a British council initiative.
I have also been instrumental in the area of screener and jury for some of the notable and reward systems in Nigeria e.g Africa movie academy awards (screener) , juror (best of NOLLYWOOD awards) and currently NEMCEA an award that caters to content creators across tv and the radio broadcast industry which is in its maiden edition.

I interestingly run a talent management and consultancy company that provides advisory and management roles for artists and bridges a smooth working relationship between brands and talents. I have a number of talents in my portfolio.

One of the most challenging for me would be being a radio host, considering being a shy individual. I successfully ran over 100 episodes of Serenade with boss-lady which was a celebration of Nigerians, at home and across the globe, doing well in their endeavors in life.

This show actually cuts across all sectors.It was both a live program as well as a visual on social media (Instagram and radio) and it earned me the name Bosslady.

I would say I am also a businesswoman.(Chuckles)

Tell me about some of the courses you did abroad….

Well, I have never lived abroad.I have only been on holiday and did some professional courses like obtaining a professional certificate in Film Production and Design from the prestigious University of Los Angeles, California US .. abroad to sharpen my skills.

Where were you born ? Where did you grow up and what schools attended ??

Why I Held My 40th Birthday In IJEBU-ODE – ABUJA Big Boy, SEUN IGBAGBO

I Had 6 Miscarriages Before I Had...

How RevolutionPlus Bounced Back This Year