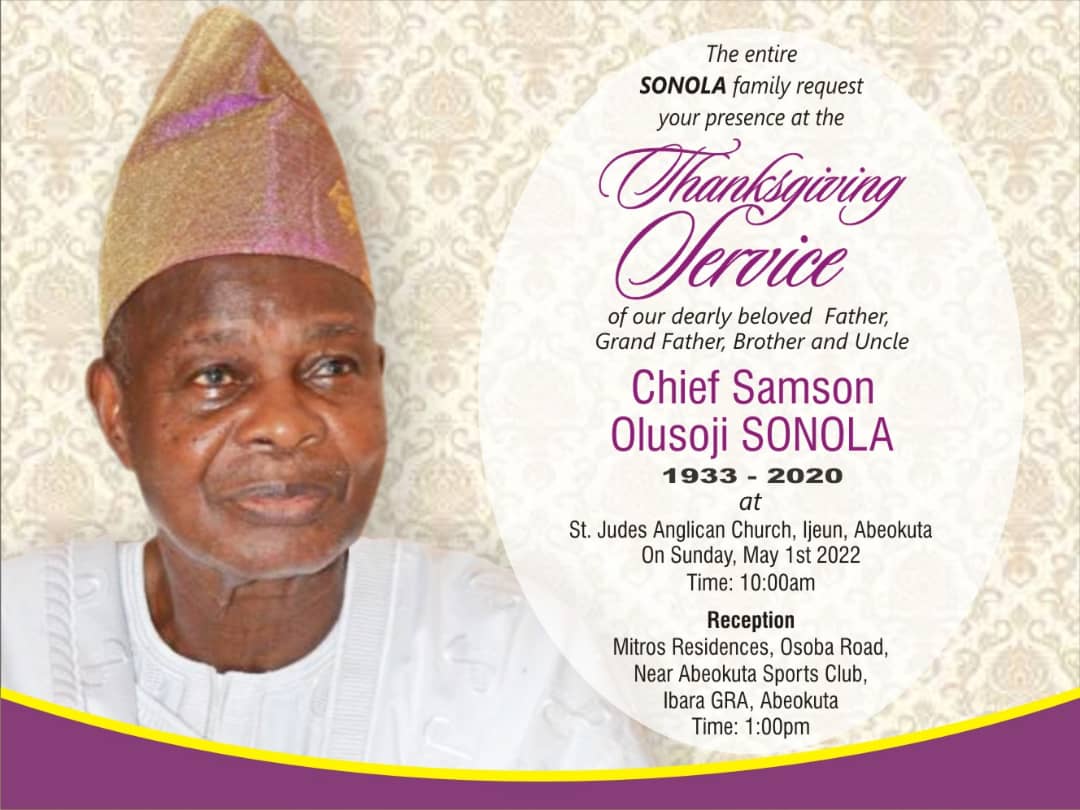 Abeokuta came alive on
Sunday 1st May 2022,when the children and family members of Chief Samson Olusoji Sonola, hosted a thanks giving service in honour of their late dad @St Judes Anglican Church,Ijeun, Abeokuta.

The service was anchored by
Rev A.A Adelaja and Mr .O. Oyedele.Ven .S.A. Abodunrin,who is the Vicar/Archdeacon anchored the Thanksgiving segment,which included the Thanksgiving by the children of the deceased.Late Chief Samson Olusoji Sonola who died in 2020 is survived by accomplished sons,daughters-in-law and grand children.

The service was well attended by family and friends.Although the church where their father worshipped in his lifetime is currently under reconstruction,some guests who could not find space in the main church,sat in the extension,next door.

After the service church members and officiating officers were served,while guests who came from Lagos all proceeded to Mitros Residences in Ibara GRA,near Abeokuta Sports Club, Abeokuta,for the reception.

The hall was just perfect and appropriate for the number of guests invited.Citypeople gathered that it wasn’t planned to be a big party.This is because Papa Sonola died 2 years ago at the age of 87, but because of the lockdown in social activities their handsome dad could not be given the Grand funeral they had in mind.
The Hall was decorated in chocolate and pink chiffon fabrics, while the tables were covered in white cotton fabrics,with luxury chairs and a flower vase placed at the centre of the table.

When the Sonolas arrived the venue they had to go and change into their second outfit, which is the aso ebi that all the guests were putting on.It is an Ankara chocolate brown ankara with baby pink designs on it.
All the Sonola brothers and their wives had reserved tables.

Noticeable were Government College Old Boys and their wives,all beautifully attired in their aso ebi.They are all classmates of the eldest son,Dapo Sonola,a GCI old boy.

His brothers also had separate tables to entertain their guests.

Fast rising Star Yo Biggs was on band stand to thrill the guests and family of the deceased nonstop with melodious songs.He sings like Chief Commander Ebenezer Obey and he played non stop, for hours.Everyone had enough to eat and drink and danced to good music.

It was a classy party, as the Sonola Brothers and their wives were on their feet all through to make sure everyone had enough to eat and drink.
The younger brother of the deceased Dr.Sonola was at both the church and reception making sure everything went as planned.He was the former Rector Of Ogun State Polytechnic,in those good old days.