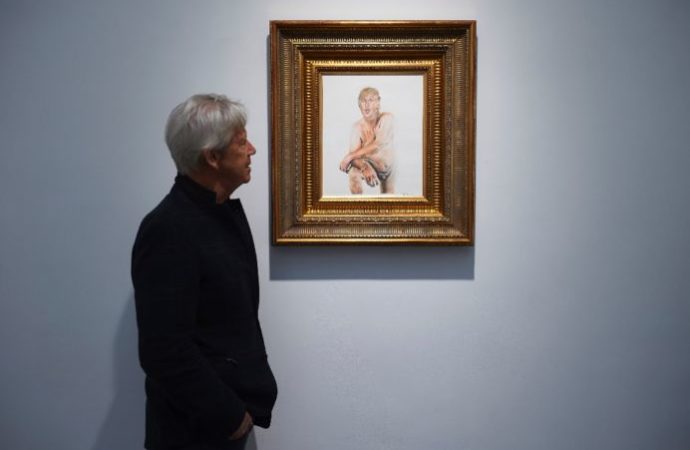 President Donald Trump sure has many firsts to his resume.

The nude painting came complete with a micro-sized penis.

The Australian-American artist, Illma Gore, who composed the painting, however, described the penis as “fictional” and not necessarily representative of Mr President’s authentic genitalia.

As a gender fluid and feminist performance artist, Gore’s work is based around political topics and the physical self, the significance and importance placed on the human body.

Facebook eventually banned the work after it went viral on the web.

The painting was priced at a whopping £1m and was exhibited at the Maddox gallery in London.

As reported by the various foreign media, the gender fluid artist had done the painting during the last American presidential election.

Illma said she got beaten for the work by an American who felt it was insulting to then GOP candidate Trump. She said she was punched by someone chanting “Trump 2016” near her Los Angeles home.

Despite all odds, the artist said she planned to continue to sell the artwork, and that she would donate some of the money to a charity that supports homeless people.

Most Powerfu Man On Earth: Donald Trump’s nude painting priced at £1m was last modified: January 24th, 2017 by Arinze Ago