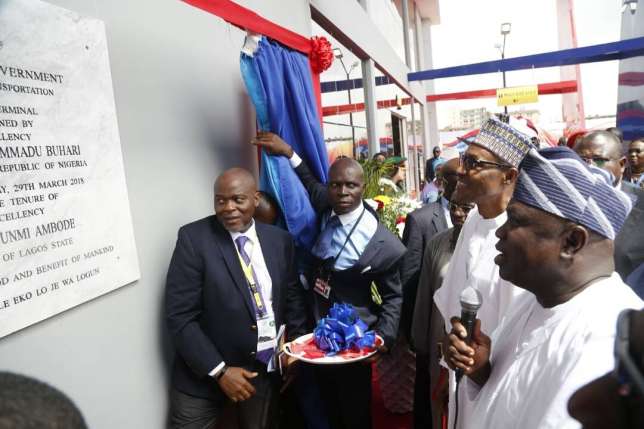 Lagos was shut down on Thursday as President Muhammadu Buhari commissioned the Ikeja Bus Terminal during his official visit to the state on Thursday, March 29, 2018.
Lagos State governor, Akinwunmi Ambode, had earlier received by Buhari at the Presidential Wing of Murtala Muhammed International Airport for his historic visit.

The president immediately headed for the terminal which is located behind the rail line of the Nigeria Railway Corporation and about 1km from the airport.
According to the Lagos State government, the new bus terminal will connect 22 routes with over 70,000 people expected to transit through the facility daily.

After the commissioning on Thursday, President Buhari left the Ikeja Bus Terminal and headed to Eko Convention Center, Victoria Island, Lagos to chair Bola Tinubu’s Colloquium in honour of the birthday of the National Leader of the ruling All Progressives’ Congress (APC).

Lagosians lament over the closure of roads for President’s visit
With the shut down of routes, many Lagosians have found it difficult to move around, an experience which has been shared on Twitter. Lagos is presently a trending topic on the micro-blogging site with over 53,000 tweets.

The Ikeja Bus Terminal was officially commissioned by President Muhammadu Buhari. The Terminal is one of our flagship transport infrastructure under the State Bus Reform Initiative.#ItesiwajuEko #IkejaBusTerminal pic.twitter.com/ifYHGpeKra

Also, on Wednesday, March 29, 2018, the Federal Airports Authority of Nigeria, announced that commercial vehicles would only operate from 7am-7pm around the Murtala Muhammed to allow smooth movement around the airport during the visit.