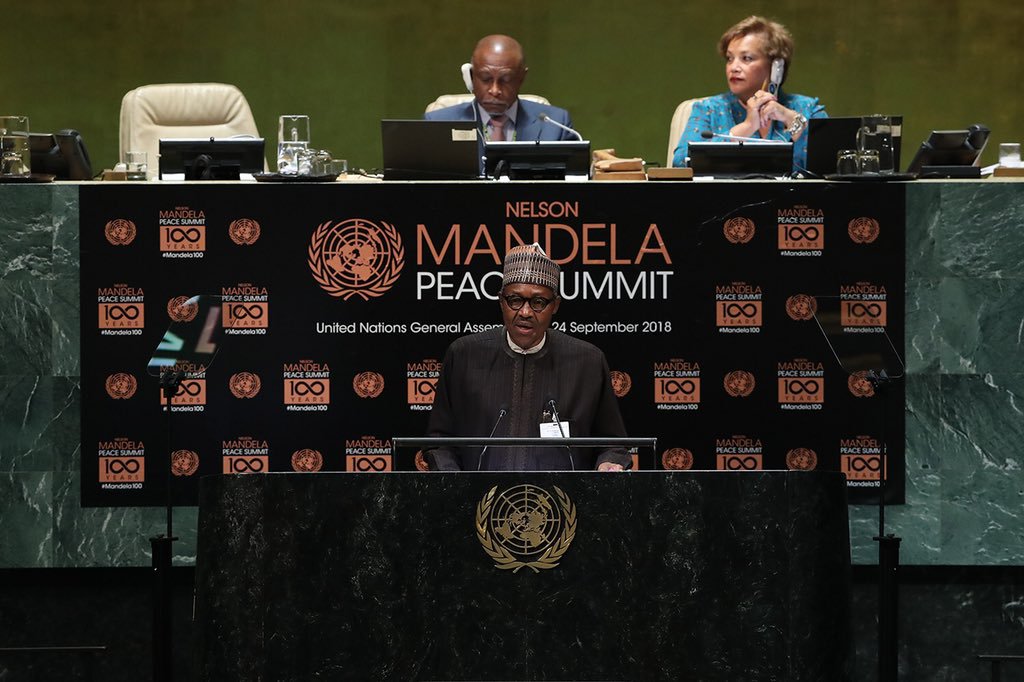 Mr. Buhari spoke on Monday evening at the declaration of Nelson Mandela Decade of Peace at the UN headquarters in New York in commemoration of the centenary celebration of the late anti-apartheid icon.

According to him, Nigeria is committed to the promotion and protection of the rights of all women as well as providing an enabling environment for them to realise their full potential.

“We also recognise that inherent dignity and the equal and inalienable rights of all peoples in the world is the foundation of freedom, justice, and peace in the world.

“We declare that racism, racial discrimination, xenophobia, and related intolerance present the very opposite of the noble purposes of the United Nations.

“We recognise that tolerance of cultural, ethnic, racial, and religious diversities are essential for lasting peace, understanding and friendship among peoples, nations, cultures, and individuals.

“As Mandela passes to history, we stand with him in his aspirations for a better world,” the Nigerian leader said

The Nigerian leader, however, stated that now was also a time of great hope and renaissance.

He stressed the need for the global community to live up to Mandela’s indelible legacies by being accountable to the values and principles and hope for the declaration through striving for a just, peaceful, prosperous, democratic, fair and inclusive world.

According to him, there is a need for concerted efforts to build a just, peaceful, prosperous, inclusive and fair world and revive the values which Mandela stood for.

Mr. Buhari also said: “This centenary celebration provides an avenue to reflect on the legacies of Nelson Mandela and his unwavering advocacy for human rights, social justice and peace.

“It also affords us the rare privilege to rededicate ourselves to the service of humanity by championing democracy, conflict resolution, disarmament, mutual respect, reconciliation, gender equality and the fight against poverty.

“There is no doubt that in the quest to attain peace and development, the world will draw inspiration from the life of Nelson Mandela.

“As we herald the Nelson Mandela Decade of Peace, Nigeria calls on all states to recognise that the United Nations is built on pillars of peace and security, development and human rights.

Buhari said by the declaration of the Mandela’s Decade of Peace, Nigeria recognised the contributions of women to the advancement of societies and their contributions to the prevention and resolution of conflicts.

Member states at the summit adopted the first resolution of the General Assembly’s 73rd session, “committing to demonstrate mutual respect, tolerance, understanding and reconciliation in (their) relations.”

“We reaffirm our pledge that no one will be left behind,” the resolution read.

Addressing the summit, UN Secretary-General Antonio Guterres spoke of the growing pressure against human rights around the world and urged everyone to draw inspiration from Nelson Mandela’s wisdom, courage and fortitude, to face the challenges.