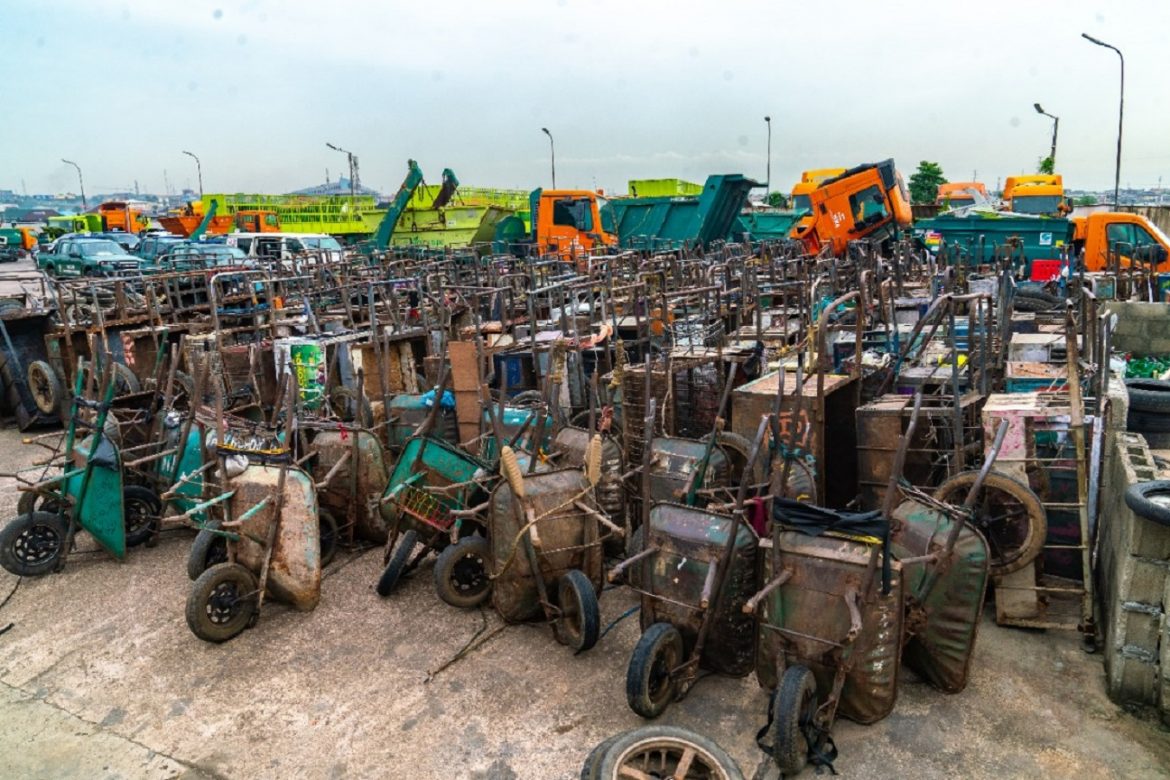 The Lagos Waste Management Authority (LAWMA) has destroyed more than 400 carts, confiscated from pushers, who serially dump waste at unauthorised locations across the city, in clear violation of the state’s environmental laws.

Commenting on the exercise which took place at LAWMA’s Ogudu facility, the Managing Director/CEO, Mr. Ibrahim Odumboni, stated that the exercise which would be a continuous one became necessary to weaken the ability of the cart pushers to return to business and to decimate the cart population defacing the cityscape, stressing that the activities of cart pushers across the Lagos metropolis remained banned.

He observed that cart pushers posed a threat not only to environmental sustainability but to the security of residents, as many cart pushers harbour dangerous weapons like knives, machetes and others, to perpetrate criminal activities.

According to him, “Cart pushers are about the biggest threat to our effort at attaining environmental sustainability. We will not allow anyone or a group of persons to derail the ongoing efforts to make the environment better. Criminal elements have hidden under this guise to carry out heinous crimes. If there are no carts to push, they will get other jobs.

“They pose as much threat to the environment as to the security of the citizens. It will shock you to know that many of them keep weapons like knives, machetes, etc, in their carts to attack and dispossess unsuspecting persons when the opportunity presents itself. One of such cart pushers was tried and jailed last week, having been apprehended at Victoria Island, vandalising and stealing the government’s iron rods. There have been many reported theft cases of movable items from people’s compounds traced to them”.

The LAWMA boss disclosed that opportunity was open for repentant cart-pushers, to step forward, get registered with LAWMA, be given proper orientation, and be trained as pickers and off-takers of recyclables, working hand in hand with other stakeholders in the waste management chain.

Odumboni maintained that the government was not interested in taking away their means of livelihood, which has to be within the confines of the law.

The LAWMA boss reaffirmed the agency’s total commitment to making the State’s city space an environment-friendly one, urging residents to join the Authority’s quest for a cleaner Lagos by shunning improper waste disposal and paying their waste bills and patronising assigned PSP operators.

Also commenting, the president of the Association of Waste Managers of Nigeria, AWAMN, Mr. David Oriyomi, lauded the government’s constant support for the association, promising a new era of fruitful collaboration with LAWMA.

How TINUBU Makes Millions Abroad Details Of His Investments Abroad