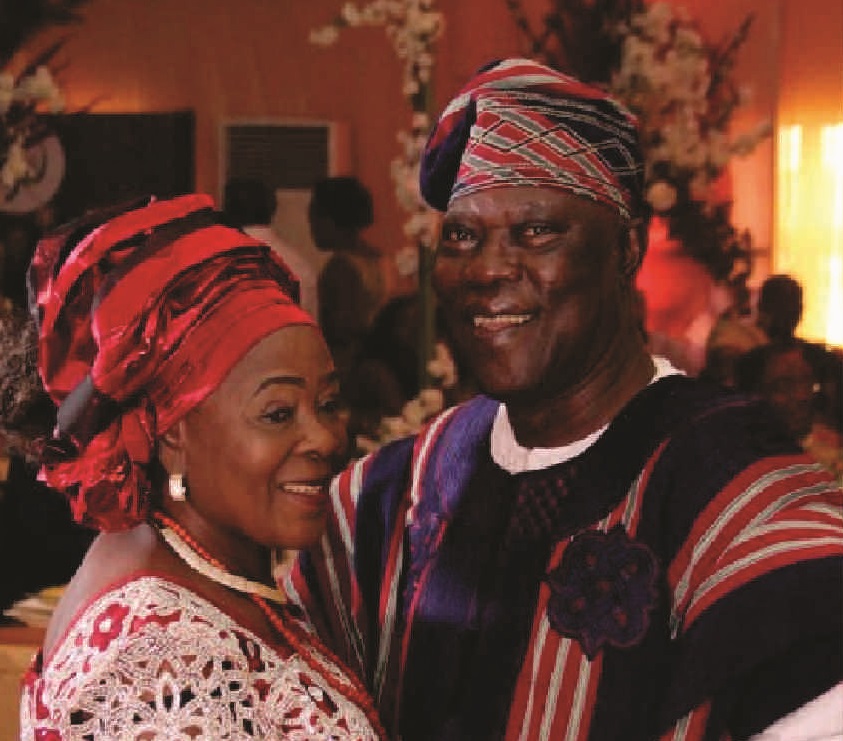 Professor emeritus, Emmanuel Aduayi and wife, Patricia, recently threw a big 2-in-1 party in Lagos. The 80th birthday & 50th wedding anniversary party was held on the 9th of September, 2017, at the 9th Darlington Event Centre, Ilupeju, Lagos State.
Family, friends, well-wishers and academics all stormed the party venue to celebrate with the couple for coming a long way together. City People’s Reporter, FEMI FABUNMI, attended the glamorous event and brings you gists.

IT WAS A 2-IN-1 CELEBRATION
Professor Emmanuel Aduayi clocked 80 years, while his marital journey was also 50 years old. Professor Emmanuel decided to roll out the drums for sparing his life till 80 and also for keeping him and wife together for 50 years.

PROFESSOR EMMANUEL THANKS GOD @ 80
Darlington Event Centre was temporarily converted to a church auditorium for the purpose of thanksgiving service Professor & wife Patricia, gave testimonies of their 50 year-old-marriage and thanked God for sparing their lives till now.

ABOUT PROFESSOR EMMANUEL
Professor Emmanuel Adote Aduayi was born in Utagba-Ogbe, Kwale, Delta State on April 17, 1937.
He attended St. Peter Claver’s College, Aghalokpe, Sapele. After secondary education, he worked briefly for African Timber & Plywood Limited. He later taught in a school before joining the Bank of West Africa now First Bank.
Later, he decided to further his education. He got admission into the Arizona State University, where he obtained his first degree. He proceeded for his post graduate degrees abroad and then began to lecture.

HOW PROFESSOR & WIFE MET
Upon completion of his first degree programme in America, the Prof came back to Nigeria to take up a teaching job at Edo Boys High School. He met a damsel, Patricia Sagay, and feelings grew for each other.
They both walked down aisle in September 1967.

RECEPTION PARTY INSIDE DARLINGTON HALL
Darlington Event Centre was thrown into a Frenzy of activities as family members, friends, well-wishers and academics trooped enmasse to celebrate an eighty-year old professor, who has stayed for 50 years in marriage.

PARTY PACKAGED BY REMMY J
A Lagos-based event planning outfit, Remmy J, did a Yeoman’s job for the event. The hall’s decoration, lighting & sounds were perfect

USHERS @ THE BECK & CALL OF GUESTS
Beautiful ladies under the auspices of Remmy J hostesses were brought in and they maintained standard.

MC’S RIB-CRACKING JOKES
Popular comedian, Adegboye-Damola, was the compere of the day and he performed Excellently well. Guests were seen laughing to his jokes throughout the event.

MELUKA CHOIR PERFORMS
A group of Choristers from the ancient city of Ibadan mounted the podium to serenade guests with quality classical & modern vibes. The celebrator and guests were really thrilled.

WITH LOVE FROM GHANA
Mrs. Comfort Adzaho flew in from Ghana to celebrate Prof. & wife. She heaped praises on the couple for staying together for 50 years and for being wonderful individuals and hospitable too.

MASSIVE MEDIA COVERAGE
The party was massively covered by different print & electronic media. Paparrazis and cameramen kept washing the couple in the deluge of their flashing light.

MEGAMOND’S BOSS WAS UP & DOING
Otunba Olumide Osunsina, CEO Megamond Properties, was seen moving from one table to the other in the hall, ensuring that the party was hitch-free. Apart from being the Megamond’s boss, he is also an in-law to Prof. Emmanuel.

ARISTO BAND DID JUSTICE TO MUSIC
Lagos-based crew, Artiste band, kept serenading guests @ the event. Everyone was seen shaking and dancing to the band’s melodious vibes.

DJ XB ON THE WHEELZ OF STEEL
Popular Disc Jockey & DJ XB was on ground to complement the efforts of the band. XB’s musical selection.

FOOD WAS ON POINT
Hamptons Kitchen was in charge of food and they scored a very high mark. All kinds of food, ranging from local to intercontinental dishes, were served to guests.

J.K PARTY WORLD TOO
Another wonderful Kitchen, J.K Party, also served at the party and I can tell you authoritatively that their meals too were very tasty.

CHILLED DRINKS BY ICE. CODE
Lagos-based drinks company, Ice-Code, was hired to supply drinks and they performed creditably well. All kinds of soft & assorted drinks were served chilled at the party.

NATURELLE COCKTAIL COMPLEMENTED TOO
Many guests were served chilled cocktail drinks with different kinds of flavour.

CUTTING OF THE CAKE
A gigantic cake, representing Prof’s age and the wedding anniversary was cut by the couple. The MC made guests to count from 1 to 80 before the couple cut their cake.

CONVERGENCE OF ACADEMICS
Professors, Doctors and University teachers stormed the venue in their numbers to felicitate with one of their own. It was purely a gathering of brains & books.

MAXIMUM SECURITY PROVIDED
It was security extraodinary as security personnel dressed in white and black uniform were spotted manning every entrance to the hall. The Nigerian Soldiers were also spotted complementing the efforts of the men-in-black ‘N’’ white.

ABOUT PROFESSOR EMMANUEL’S CLOSING REMARKS.
When he was asked to give the vote of thanks, Prof Emmanuel stood and heaped praises on his wife, Patricia, for coming that far with him.
He said they had come a long way and that God should continue to bless and keep her. He thanked everybody for coming to his party.