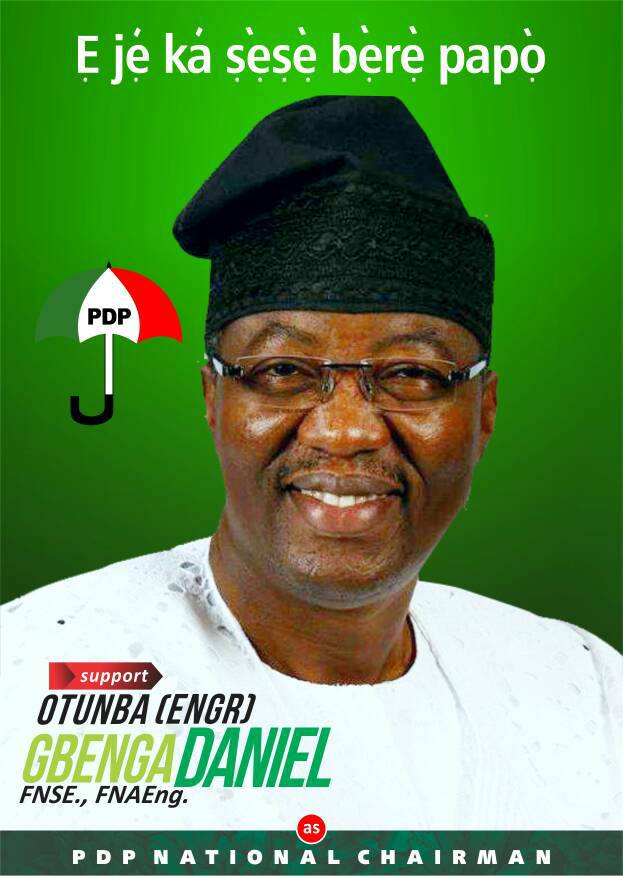 The two-term governor of Ogun State and a National Chairmanship aspirant of the People’s Democratic Party (PDP), Otunba Gbenga Daniel, has expressed his willingness to correct the past mistakes of the party.

He identified his interest before hundreds of party faithful at the Federal Capital Territory, Abuja on Wednesday, October 18, 2017, assuring the progressives of wholesale restoration of lost glory of the party.

OGD, as Otunba Gbenga Daniel is fondly called, declared that he stood as a bridge in between a conservatively hostile and restlessly progressive different and diverse generation. He added that the party ‘must harness the abundant energies of our youth and gain from the timeless wisdom of our elders.’

“I think I am most eminently qualified to correct some of our mistakes of the near and remote past having served as a Chief Executive officer of one of the most complex States in Nigeria, Ogun. “Having supervised and won elections twice under the platform of the PDP. I have conducted and managed not only national elections, but also local government elections with all their attendant complexities.

“I have built a network of personal relationships across the length and breadth of Nigeria, both in my private capacity as a businessman and public life as a governor and politician; these networks are expected to come handy in the process of healing wounds and building bonds and synergies necessary in rebuilding and refloating the political party,” he stated.

The PDP, he said, needs a Chairman that can lead the party to meet the needs, aspirations and yearnings of young Nigerians.

The politician emphasised to the gathering that he had gone round visiting many of the leaders and stakeholders of the party in the last few weeks.

He said further that he believed that he had sufficiently interacted with many of the party leaders, elders and members to have identified various fault lines, which needed closing up so that the party could return to the ideals and vision of its founding fathers.

According to him, “one of my focus as the National Chairman is to bring back many of our party men who have left.

“My ultimate goal is to work towards the victory of our party in the 2019 general elections and in all other elections in between. To achieve this, I am prepared to work with all leaders of our party, various interest groups and individuals.”

Commenting on the current Federal Government headed by President Muhammadu Buhari of the All Progressives Congress (APC), OGD said that Nigeria is yet to have an appreciable 12 months of economic growth under the party since 2015, and that this is an F9; failure.

“It is disquieting that the APC led government claim to focus on fighting corruption, while facts on the ground suggests that Nigeria has become worse off and sinking low even in graft.

“For instance, latest corruption index in Nigeria (2016) according to Transparency International (the global watchdog for measuring corruption) was 2.8/10. Before 2015, Nigeria had a P8 in corruption but and A3 in economic growth, now we have an F9 in both economic growth and corruption.
“About two months ago, the National Bureau of Statistics (NBS), Nigeria’s number 1 repository of facts and data, revealed that more than N402 Billion was paid as bribes within the last 12 months. What is N402 Billion? – It is more than the Federal Government’s capital,” OGD said.

OGD explained that as a professional engineer, he had learnt over the years, both in the course of training and years of practice that whenever there is a near system collapse, sometimes the wheels should be reinvented; “sometimes, we need to pause and go back to default settings, we need to refresh, recreate and regenerate.

“And I believe, as a member of the most prestigious Academy of Engineering in Nigeria, I am equally qualified in the engineering of default setting and the strength of character to do what has to be done,” he said.

While stating that a new possible, he said that the party is going to fight Poverty like never before.

He however, stated that most Nigerians today have come to recognise that the PDP midwifed democracy for Nigeria and that the country fared better under the political party, while regretting that the people did not vote out the party for want of performance.

“We lost out because we miscalculated on certain aspects of our politics; outside the management of the nation’s economic resources. We failed to ask some critical questions needed for planning.

OGD, whose aspiration has been applauded by top members of the party, stressed that the people failed to appreciate that the 2015 election was not just an election, but that it was a referendum.

“A referendum not for secession, but for “effective governance”. I hold firmly that more than planning, leadership needs to ask more questions at all times. Asking the right questions is what the new leadership of the PDP under my watch will focus on.

“Our inability to ask the needed questions at the appropriate time no doubt affected the fortunes of the PDP and reflected in the final outcome of the party in the 2015 general elections,” he submitted.

Speaking further about his readiness to vie for the PDP National Chairmanship position during the party’s National Convention on 9th December, OGD declared that the difference between the PDP and APC is in two words ‘Vision’ and ‘Mission’, and that The PDP has a ‘Vision’ for Nigeria, while the APC only has a ‘Mission’

He said further: “Like I said, especially in the light of current reality in the management of our Commonwealth in the present dispensation, Nigeria’s economy was better managed, under the PDP.

“That has been the fastest growth under civilian rule in the history of our great nation, and it happened under the PDP.”

I am Most Qualified To Correct Past Mistakes of The PDP – Otunba Gbenga Daniel was last modified: October 18th, 2017 by Reporter