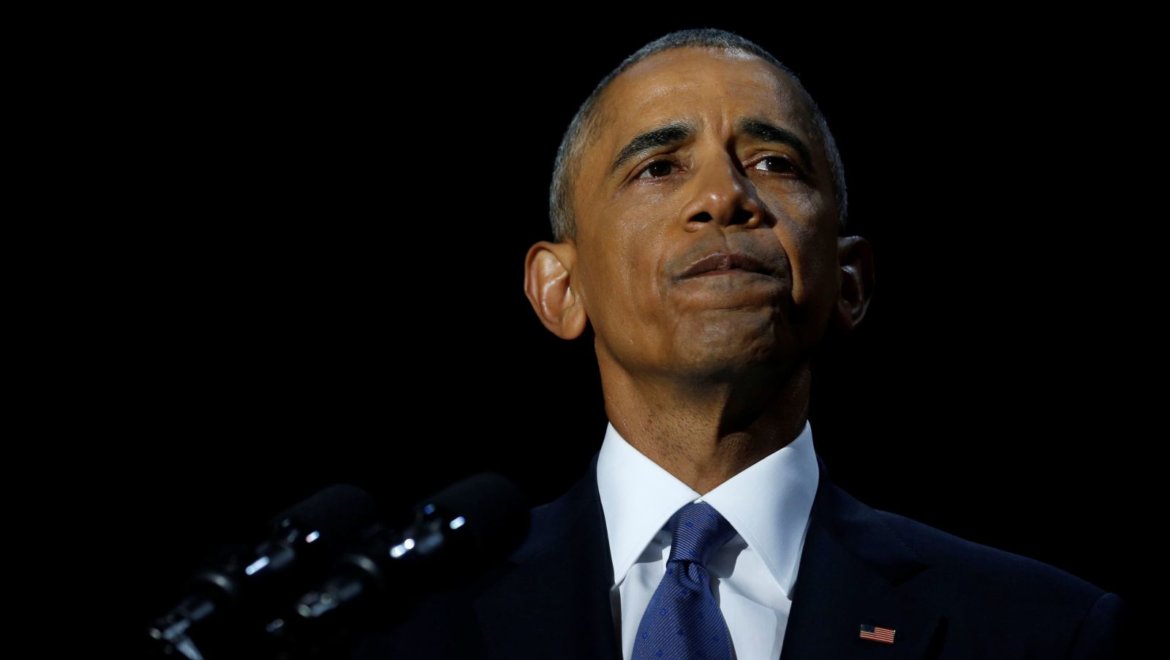 Former president Barack Obama made his first public appearance on Monday, April 24, 2017 since leaving office when he hosted a discussion at the University of Chicago with students from across the city.

At the event, he said the work he did in Chicago as a community organizer laid the groundwork for his life in politics. Read the full text below…

I was 25 years old. I had gotten out of college filled with idealism and absolutely certain that somehow I was going to change the world. But I had no idea how or where or what I was going to be doing. And so I worked first to pay off some student loans. And then I went to work at the City Colleges of New York on their Harlem campus with some student organizing. And then there were a group of churches out on the south side who had come together to try to deal with the steel plants that had closed in the area and the economic devastation that had been taking place, but also the racial tensions and turnover that was happening.

They formed an organization and hired me as a community organizer. I did not really know what that meant or how to do it. But I accepted the job. And for the next three years I lived right here in Hyde Park but I worked in communities like Roseland and Pullman. Working class neighborhoods. Many of which had changed rapidly from white to black in the late ’60s, ’70s. And full of wonderful people who were proud of their communities, proud of the steps they had taken to try to move into the middle class, but were also worried about their futures, because in some cases their kids weren’t doing as well as they had. In some cases these communities have been badly neglected for a very long time. The distribution of city services were unequal. Schools were underfunded. There was a lack of opportunity. And for three years I tried to do something about it. And I am the first to acknowledge that I did not set the world on fire. Nor did I transform these communities in any significant way, although we did some good things. But it did change me.

This community gave me a lot more than I was able to give in return, because this community taught me that ordinary people, when working together, can do extraordinary things. This community taught me that everybody has a story to tell. That is important. This experience taught me that beneath the surface differences of people that there were common hopes and common dreams and common aspirations. Common values. That stitched us together as Americans. And so even though I, after three years, left for law school, the lessons that had been taught to me here as an organizer are ones that stayed with me. And effectively gave me the foundation for my subsequent political career and the themes that I would talk about as a state legislator and as a U.S. Senator and ultimately as president of the United States.

Now, I tell you that history because on the back end now of my presidency, now that it’s completed, I’m spending a lot of time thinking about what is the most important thing I can do for my next job? And what I’m convinced of is that although there are all kinds of issues that I care about and all kinds of issues that I intend to work on, the single most important thing I can do is to help in any way I can prepare the next generation of leadership to take up the baton and to take their own crack at changing the world. Because the one thing that I’m absolutely convinced of is that yes, we confront a whole range of challenges from economic inequality and lack of opportunity to a criminal justice system that too often is skewed in ways that are unproductive to climate change to, you know, issues related to violence. All those problems are serious. They’re daunting. But they’re not insolvable.
What is preventing us from tackling them and making more progress really has to do with our politics and our civic life. It has to do with the fact that because of things like political gerrymandering our parties have moved further and further apart and it’s harder and harder to find common ground. Because of money and politics. Special interests dominate the debates in Washington in ways that don’t match up with what the broad majority of Americans feel. Because of changes in the media, we now have a situation in which everybody’s listening to people who already agree with them and are further and further reinforcing their own realities to the neglect of a common reality that allows us to have a healthy debate and then try to find common ground and actually move solutions forward.

And so when I said in 2004 that red states or blue states, they’re the United States of America, that was aspirational comment, but I think it’s―and it’s one that I still believe, that when you talk to individuals one-on-one, people, there’s a lot more people that have in common than divides them. But honestly it’s not true when it comes to our politics and civic life. Maybe more pernicious is people are not involved and they give up. As a consequence, we have some of the lowest voting rates of any democracy and low participation rates than translate into a further gap between who’s governing us and what we believe. The only folks who are going to be able to solve that problem are going to be young people, the next generation.

And I have been encouraged everywhere I go in the United States, but also everywhere around the world to see how sharp and astute and tolerant and thoughtful and entrepreneurial our young people are. A lot more sophisticated than I was at their age. And so the question then becomes what are the ways in which we can create pathways for them to take leadership, for them to get involved? Are there ways in which we can knock down some of the barriers that are discouraging young people about a life of service? And if there are, I want to work with them to knock down those barriers. And to get this next generation and to accelerate their move towards leadership. Because if that happens, I think we’re going to be just fine