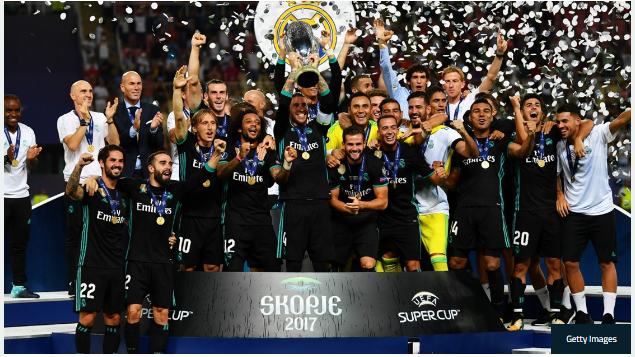 Goals from Casemiro in the first half and another from Isco in the second half ensured that the Los Blancos carried the day.

However, Romelu Lukaku managed to pull one back for the Europa League Champions in the 77th minute when he tapped in a rebound from Nemanja Matic shot.

Although that effort was merely a consolation as Madrid proved to be worthy European champions with a solid defensive display and life threatening attacks.

United were given encouragement by Lukaku’s strike, despite rarely threatening the Madrid goal in the previous hour, and could have scored a barely deserved equaliser through half-time substitute Rashford with nine minutes left.

United were unable to create another clear-cut chance as Madrid became the first team to retain the Super Cup since 1990.

With temperatures over 30C in the Macedonian capital, the match was twice stopped for scheduled cooling breaks implemented by governing body Uefa.

“I think we did well. We lost 2-1 which, I think, shows the result was really short, and one of the goals was offside so with a good VAR

“We were playing against a team of fantastic players and we discussed the result until almost the end, not the end but almost the end.”

SEE ALSO: IT IS “GAME OVER” – MOURINHO GIVES UP ON SIGNING BALE