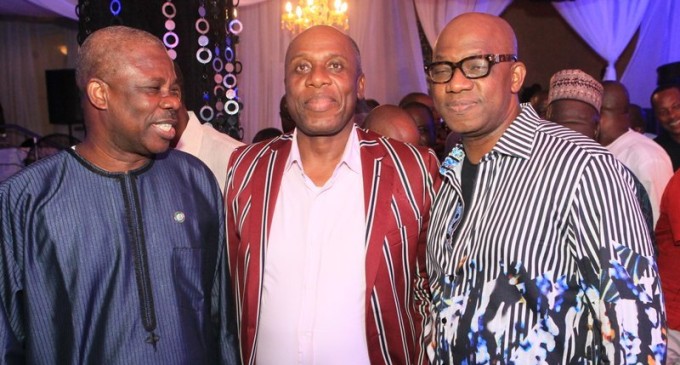 This is the story of 2 friends who have parted ways over irreconcilable differences. It is the story of Ogun governor, Senator Ibikunle Amosun and Prince Dapo Abiodun. Prior to the return to civil rule in 1999, the duo were very good friends. In 2011 when Senator Amosun ran for Ogun governorship, Dapo Abiodun supported him. So close were they that Amosun convinced Dapo Abiodun to run for public office in his Ogun East Senatorial zone. Even when Amosun ran for a 2nd term in 2015, Abiodun still was right behind Amosun. But things went bad during Amosun’s 2nd term.

His friendship with Amosun subsequently turned sour, following the indication of the former intent to throw his hat into the governorship ring early last year 2017.

Insiders say Way back, Dapo  Abiodun was instrumental in getting Asiwaju Bola Ahmed Tinubu to endorse Amosun for the 2011 elections.

With both men having mutual friends in high places and across Ogun State, observers believe Abiodun’s recent entrance into the gubernatorial race might be a serious challenge to Amosun’s desire to have an Ogun West aspirant succeed him.

It was gathered that  Dapo Abiodun spent big for the 2015 general elections and even after. He is not somebody Amosun can scare away with government money, because he too has money, and  he  has been in politics before the governor and he is well-known in the two major political parties.”

Thus far, at least three meetings arranged by mutual friends to resolve the dispute between Amosun and Abiodun has failed. During one of such meetings, the governor was said to have pleaded with the Heyden Petroleum boss to accept the ticket as the senatorial candidate of Ogun East, but Abiodun declined, insisting that it is the governorship seat or nothing. A source told Uhuru Times that Amosun had earlier pledged the same ticket to Senator Lekan Mustapha, who recently facilitated the defection of hundreds of opposition Peoples Democratic Party (PDP) members in Ogun East APC.

That all is not well with two once upon a time buddies, after the Consensus list came out few weeks ago and the Public Relations Officer of the Dapo Abiodun’s camp issued a release turning down Governor Amosun’s choice of the party candidates and how he emerged ,since then Dapo has been touring local government and senatorial districts in Ogun State , sending a signal to Amosun that he is not backing out in the game. Last week Thursday he paid a courtesy visit to Abiodun Akinlade, a three-term House of Representatives member at his Owode country home, Akinlade who is an APC member was also deprived of the party tickets to run for any political seats , it was a mass attendance of members of APC as they trooped out to show their love and support for both Dapo Abiodun and Abiodun Akinlade.

The same day, Governor Amosun also called a meeting of all members of the party.   Dapo Biodun turned his recent formal declaration of intent for the governorship of Ogun State into a disclosure of his previously unknown achievements as a politician

At his formal declaration in his Iperu-Remo country home in Ikenne Local Government Area of Ogun State, he described the decision of the party’s leadership to zone the coming 2019 governorship ticket to a particular senatorial district in the state as “Lacking Merit”.

According to Dapo Abiodun, “Amosun formed an alliance with and lined behind Daniel to become Ogun State governor in 2003. He (Amosun) was responsible for Daniel’s victory. The arrangement between them was for Daniel to go for 8 years, after which Amosun would take over from him, but they both fell apart. In 2011, Amosun contested on the platform of the Action Congress (AC) and he won the governorship race. We all gave him the support to run on the platform of the AC. But credit for his victory should go to Asiwaju Bola Ahmed Tinubu who facilitated his acceptance into the AC fold. It was Tinubu who introduced Amosun to Chief Olusegun Osoba who was the leader of the AC in Ogun State. After much pleas and persuasion by Tinubu, Osoba accepted and allowed Amosun to fly the AC ticket in Ogun State. He had a slim chance, but by divine orchestration, the ruling-PDP in the state was split into two, with a group going to a newly formed Peoples Party of Nigeria (PPN) and the other remaining in the PDP, due to an intractable intra-party crisis that rocked the party in the state. Amosun became the governor and we were close friends.”

Continuing with his justification for taking a shot at the Ogun State Number One job, he said, “In 2014, preparatory to the second term of Amosun, I was invited to help APC in my Ogun East senatorial district because the party was almost dying. Out of conviction, for the good job Amosun was doing in the state, I accepted to serve, because the party was comatose. We did well. I tried my best. In 2003, politics was local, because playing politics from grassroots to the top was very low. Regular meetings were hardly held inwards, local government, senatorial and state levels. In 2015, we did everything that we should have done. We ran a very good campaign, from providing electricity to Ogun Waterside in a community that had no light for over 12 years, to construct roads, to giving transformers to those communities that didn’t have electricity and to give out scholarships to indigent undergraduate students in tertiary institutions of learning. we left nothing undone.

“We did the needful and we won the election in the wards and local government levels and we ensured that Amosun won the office. In that election, we won Remo zone and it was very decisive because, if you look at the election, the governorship was lost in Ijebu-Ode, Ijebu North-East, Ijebu North and Ogun Waterside local government areas. It was where I won that the governor lost. To the glory of God, Amosun had the second term. His Excellency’s second term is minor. We had got to prepare for succession, there is a lot of talk about zoning of the governorship ticket to Ogun West senatorial district. The first thing, I will like to say is that it is not within anyone’s heart to aspire for this office. There is no law in this country that makes provision to say that a particular position must go to a particular district.

Last week,  Dapo Abiodun was successfully screened by APC national body as a governorship aspirant from Ogun State. The primaries is said to hold on the 29th of September 2018. He is among other Apc gubernatorial aspirants who have picked up the nominations forms to run for Ogun Governor.

READ ALSO: WHY I CHOSE TO LIVE IN IBADAN, VETERAN ACTRESS, DUPE JAIYESINMI OPENS UP

THAT THERE MAY BE JUSTICE FOR KEREN...