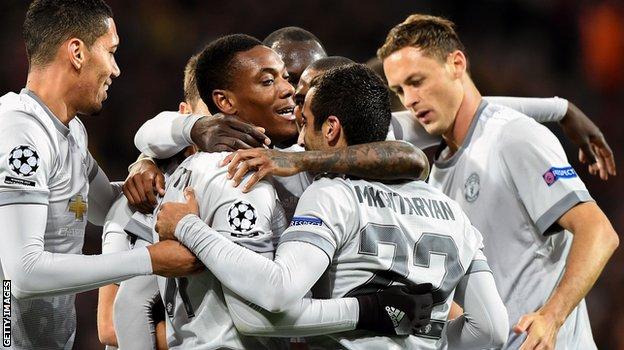 Manchester United manager Jose Mourinho said his side “were really strong” in the Champions League group stage after thrashing CSKA Moscow in Russia.
Romelu Lukaku scored twice, Anthony Martial netted a penalty and Henrikh Mkhitaryan hit the fourth as the Red Devils maintained their 100% record in Group A.
The Old Trafford side had won just one of their previous 10 away games in the competition, but two goals in the opening 18 minutes set up a very comfortable night at the VEB Arena.
“The important thing is two matches, six points and a good position in the Champions League,” said Mourinho, whose side beat Basel 3-0 in their opening game.
“Four more matches to play but we started really strongly and we are almost there.
“I think we surprised them with our attitude and we were really strong, and we killed the game. They did not look as good as they are but I think that was because of us.”
Lukaku has now scored 10 goals in nine games since joining United from Everton in the summer.
“I have to admit he is scoring really important goals almost every game,” said Mourinho.
“We know that he is a very good player, he can score lots of goals, and playing in a team surrounded by quality players it is even easier to do that.”
Four minutes in the Belgian striker headed in a cross from Martial, who went from provider to goalscorer by converting a penalty after Mkhitaryan was brought down.