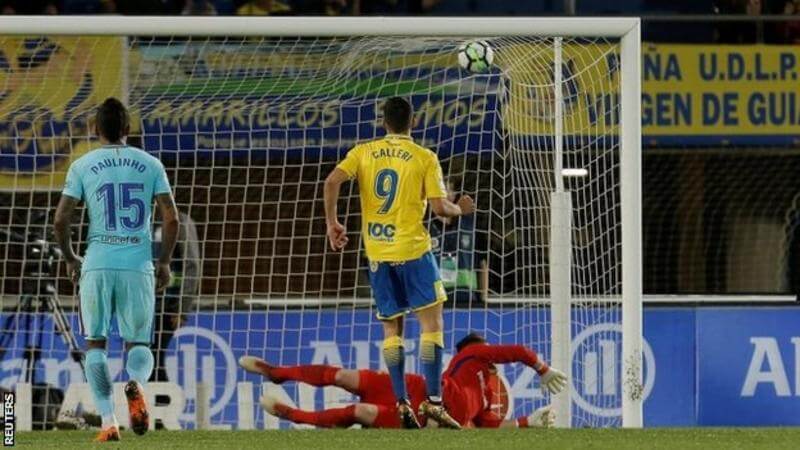 Relegation-threatened Las Palmas played out a one-all draw against top side Barcelona in La Liga clash on Thursday night.

The result, which extends Barca’s club-record unbeaten league run to 33 games, takes them five points above their next opponents Atletico Madrid.

Lionel Messi fired a free-kick into the opposite corner of the net to give Barcelona the lead.

But Calleri’s excellently dispatched penalty into the top corner rescued a point for the Canary Island hosts.

There was plenty of confusion at the decision to award the penalty to Las Palmas, who remain in the relegation zone, with the most likely reason being for a Sergi Roberto foul on Matias Aguirregaray – although the ball also hit Lucas Digne’s hand.

“The penalty came as a shock to us because of how it was awarded,” said Barca boss Ernesto Valverde. “We felt that they equalised with an ‘invisible’ penalty. They grew stronger after that and we played in too much of a hurry.

“We really wanted to leave here with three points. In the first half we felt we were always creating danger and their players kept on picking up yellow cards. We went ahead in the first half but it was not a big enough margin.”

Atletico, who go into Sunday’s Nou Camp game on the back of an eight-game winning run, were the only one of the top four sides to win in La Liga during this midweek round of games.