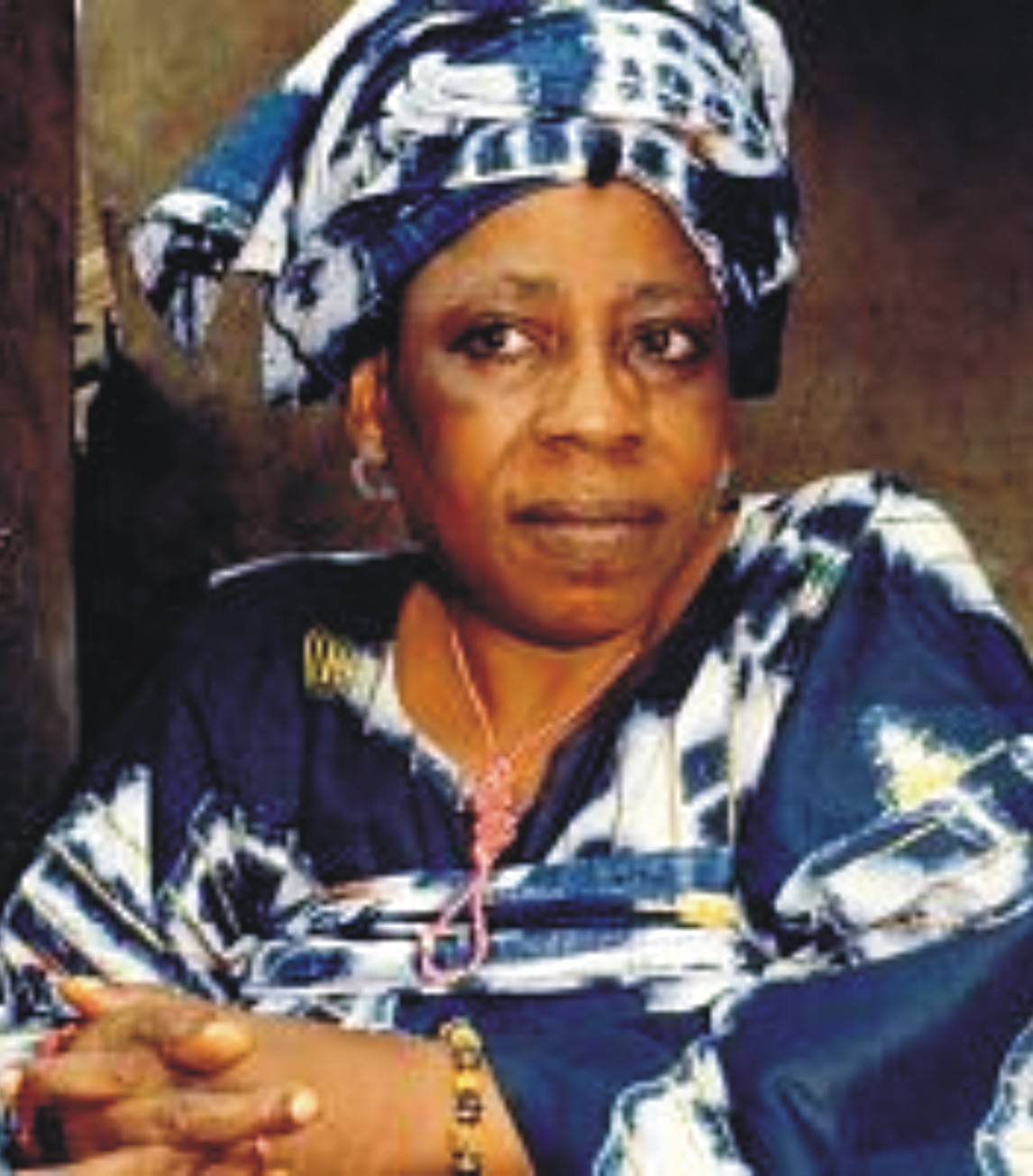 Veteran actress, Abiodun Caroline Duro Ladipo who is popularly called MOREMI is the widow of late Theatre icon Duro Ladipo. Despite the fact that her husband died 40 years ago. Moremi has remained married to Duro Ladipo, even in death. For the past few days now, activities marking 4 decades of his death have been on, with the Arts community celebrating Duro Ladipo by staging some of his plays. Since her husband died, Abiodun has been keeping the memory of her husband alive.

Last Wednesday, she led the group to National Theatre to stage one of his plays. It was well attended by many people. After the show, Mama Abiodun, who is in her late 70s and who played the role of Oya (Sango’s wife) in the epic play, ‘Oba Koso’ spoke to City People team, Publisher, SEYE KEHINDE, GBOLAHAN ADETAYO and SUNDAY ADIGUN, about her life with the late grandmaster of Theatre.

Her relationship with Duro Ladipo started as a Boss/Staff affair, but one day he called her aside and told her he was going to marry her. He did and the marriage lasted only 14 years before he died. But despite his absence she has kept at it. Below are excerpts of her interview.

We are celebrating 40 years after the death of your husband who was popular in his lifetime and beyond. How do you feel ma?
I want to thank God for everything. Also, I want to appreciate those who are around me; they have been assisting me in one way or the other, especially Dr. Seye Kehinde for the party he organized for me on my birthday years back. I will soon be 80. That was how my husband used to celebrate my birthday every 25 of Dec, and he also mandated my children and my sons-in-laws to always celebrate it for me, and they’ve been doing it.

When my husband died 40 years ago, I was still very young. I only enjoyed him for 14 years. Our marriage was just 14 years when he died, and since then I have not known any other man. I do advice all the younger ones not to hide anything from there spouses; let your husband or wife know who you are, and what you are capable of. My husband told me everything I needed to know about him.

I thank God today for the enablement to assist my husband. I have never derailed from his vision. I have never remarried, let alone of having another child aside those ones that I have for him. I’m still living in the same house he left me in. Though, the house is old now. So I’m using this opportunity to seek assistance in renovating the house which is located at Bode Wasinmi in Ibadan.

I also plan to build a small house on the remaining space on the land so that I can turn the main building into a Museum, to attract tourist all over the world, because I was told that I cannot demolish the one I’m living in, my husband built it, but we can renovate it. I want to build another one so that I can display all his properties and assets that I still keep. I still have his bed, his shoes, the cloth he wore last. Infact, I still have his comb and some other things.

How did you and Baba start the stage drama he was known for?

We started since 1962. He was a school teacher but loved everything that has to do with culture right from his tender age. He was also the choir master in his church before they chased him out of the church, when he brought some traditional drums into the church auditorium. He actually had a good intention because he said he was tired of singing with the keyboard alone. So, he wanted to introduce drumming but they refused; thinking the drums were diabolical, which was not so. My husband was a stunt believer and he loved it till death.

When his father was alive, in 1963, the first Nigeria trophy they usually give actors was given to my husband and he dedicated it to the father, and the man said “what you are doing must be very meaningful. Before the Government can give you something like this” then he prayed for him. Though, we were yet to get married that time, but we’ve been together as co-workers. So, when he revealed all his life to me, I was ready to marry him. So we got married.

What was the age difference because I knew he was older than you?

It’s because I don’t’ want to talk too much (laugh)! my husband was seriously older than me. Initially, I don’t want to marry someone that is older than me like that, but I respected him a lot even to the point of death. I always find it difficult to behave like a lady that married her age mate. I always accorded him with respect because he’s older than me, but it wasn’t easy for him too. He really suffered to marry me because my parent didn’t want me to marry outside my state, but I promised to talk to my parent and my father later fell in love with him.

He fulfilled all his promises. I believe our marriage was ordained by God. There was this white man that joined us and stood by my husband; he was the first person to arrange our trip to Germany for performance. I still recollect when he said that if he leaves me, he can’t make it. Later the King of Ila decoded a message to my father, for him to give us his blessing. It was too stressful for my husband, because my parent too were skeptical about him, and I’m from a silver-spoon family. My parent told me that they don’t want anything to happen to me. They were all sad and disappointed when he died 40 years ago.

So, after he was sent out of the church, we started our own drama group. We actually started with Christian drama and stories from the bible, we later started telling Yoruba stories with our drama like what we just watched. It’s the story of Ila Orangun. Ajagun Nla is still very much in existence there, they are still worshiping and paying homage to the deities till today. Therefore, we always make sure that we do thorough research before presenting any story. Like now, we had 3 stories on Oyo, they are; Obakoso, Obawo Aja, Obamoro. Beyiose is also a story of 3 town etc. That was how we started, and God opened the door of America to us. We don’t have money but we have names and prestige. We always travelled outside the country for different festivals.

What were the challenges you faced in this line of duty?

A lots of challenges. There was a day we traveled to Ilaro, being a man of integrity that loved what he was doing, he said he wants to make an impact on our Culture and Religion. We went to Ilaro in 1966 to perform Obakoso but people didn’t turn up, probably because of the rain that fell that day, just 6 people were present and he said he would still perform for those 6 people. He said he cannot ask those people to leave because he’s very sure that they loved him that is why they came. Cast were grumbling, that how can they perform for just 6 people, but my husband did not even looked at their side; He said that he’s a brand and he would not toil with it.

That was how we danced for 6 people for 3 hours. That was one of the challenges we experienced then, and there is no money also. Even in 1966 Commonwealth programme that they invited us to dance, they provided cloth for Igbos and Hausa dancers, but they did not give us anything. We had to go and collect cloths on credit at Oje in Ibadan and it was Obakoso that became first without any reward, except a letter that was given to us to commend our effort. I don’t know my husband offence, nobody was ready to help us. even as we have started now, nobody has shown or rendered us any help, except the Oyinlola group in Osogbo that assisted us in renovating my husband graveyard, because it has dilapidated, and they promised to still do more.

People said Baba was very powerful spiritually when he was alive, how true is that?
It is only God that has power. God gave all of us individual powers as he pleases him. My husband’s mother gave birth to him 13th times; meaning he was a still birth, before God finally answered her prayer, and that is why they named him DURO. Though, he eventually died, he was so daring when he was alive. He never fearred death. Truly, God gave him power and he demonstrated it in various ways.

The day my husband died can never be erased from people’s memory till tomorrow, because there was a sudden rain that was heavy with thunder from no where, started with a very thick storm, and erosion. UCH Ibadan can never forget 11th of March 1978. People that knew that time can never forget. It was on Saturday, and his death wasn’t natural.

Fire always come out of Baba’s mouth, when he acts especially the Sango play. How did he do it then?

Everybody knows fire always come out of Sango’s mouth. Somebody was telling me that a man wanted to initate him too, but died in the process. Duro was a powerful man. God gave him that power and he used it very well. A white man wanted to know the mystery behind that fire at the Commonwealth but for 7 days he couldn’t get anything, he eventually got angry and threw away his camera.

What is your advice for the new generation coming into Theatre?

I used to say this, the interest of this job is no more in people’s mind, rather they are looking for money. Money is their concern. As far as they can get money, they are okay. Always make sure that you have a good story lines. The way they display their nudity this day, its something else.

We must always remember our culture civilization has turned so many things upside down. They believe we veterans are old schools but it’s not like that. We must not forget our root.

We Have Been Singing For Over 20 Years