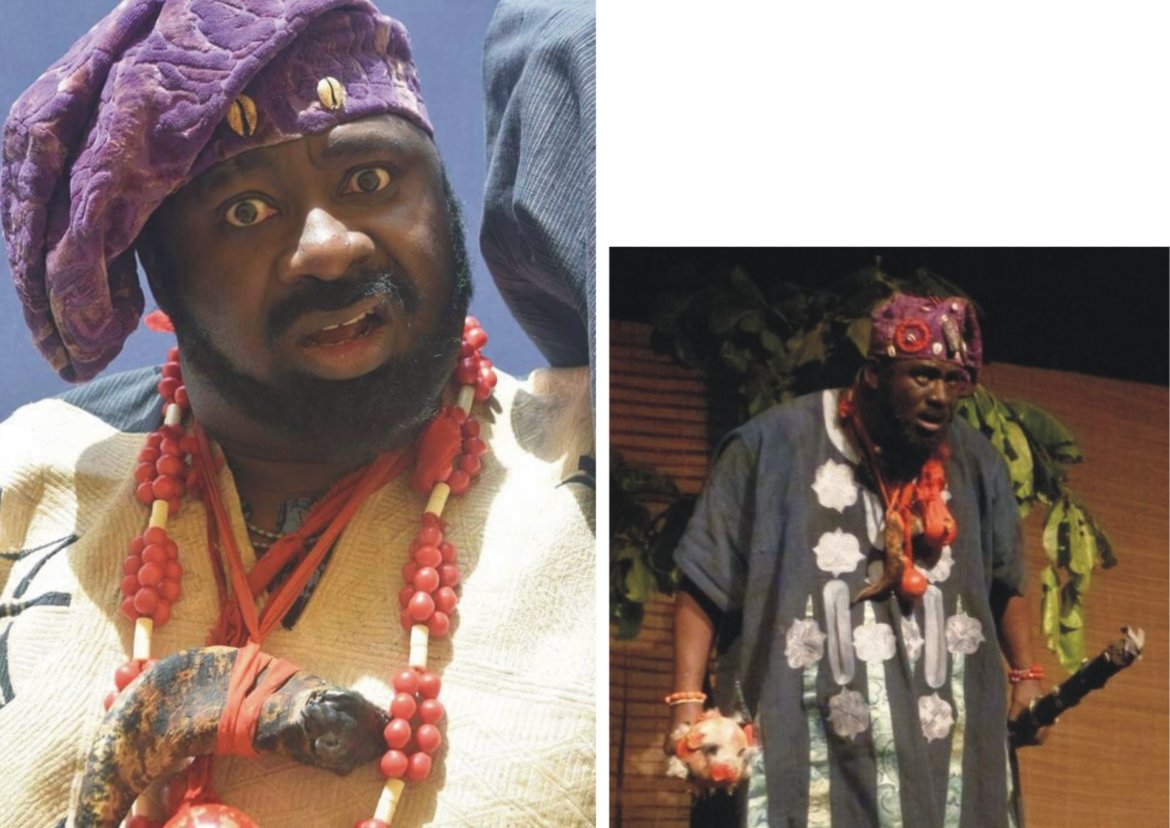 •Reveals A Lot About His Late Dad
Wole Duro Ladipo is unarguably a carbon copy of his late Theatre doyen father, Duro Ladipo, who was a Theatre icon in his lifetime. In delivery and in charisma, Wole could pass for his father. He has his father’s face. He also has the imposing height. He has studied his father for decades and has become like a reincarnation.

When he acted the role of Duro Ladipo last week at the stage play AJAGUNLA done in his dad’s honour, at the National Theatre in Lagos, he was given a standing ovation because he did it so well. It was as if Duro Ladipo had come alive again. It was at the just concluded 40th anniversary of late Duro Ladipo. This heavily built guy, with a glowing dark skin, which brings out his Africaness, dazzled everyone present with his delivery that was just like his late father. How easy was it for him to portray the real character of a legend that died 40years ago, was the first question from us.

And the University of Ibadan graduate of Political Science, who is also into cultural renaissance engaged City People Publisher, SEYE KEHINDE, Assistant Editors, Sunday Adigun, and Gbolahan Adetayo on the legacy his father left behind and his plan in given Yoruba in the diasporas hope that, all is not lost if only we are ready to embrace it.

How easy was it for you to portray the real character of a man that died 40 years ago?
Let me tell you something about this work, before I told them to audition everybody for the role of Ajagunla, I said let it be a free for all; don’t let it be as if I’m using my power, but when we now auditioned everybody; we double-cast for Ajagunla. I came late because they’ve been in the camp for about 2 weeks before I came from abroad. Though they’ve sent me the script. So I reached with them, and everybody were like wow. So I won’t say it’s by my making, but baba. When we were young, he always involved us in everything. I was the little boy they threw inside the water in “Moremi” on NTA then. So it was in the blood. We already have all the script off hand, we just match the director’s approach to it and we listened to instructions and that was it.

How did you plan to immortalize Baba Duroladipo?

Well, you will agree with me that stage play is very difficult and different from film making; the cost, the rigor, more of the reason why I respect Muideen Oladapo, popularly known as lala, he’s a circular artist. What he did, not all these Nollywood actors can do it. What Papilolo did, not all these people can do it. This is not a matter of editing. Whatever you perform right there is what people see.

If you mess up, you will see it right there. Baba has over 16 traditional plays; ranging from Obakoso, Ajagunla, Obanaja, Beyiose, Oluweri, Eda, Alajobi, Obaluaye etc all these tell the existence of Yorubas, because he so much believed in existence of Yoruba. Look at this Ajagunla story, is still relevant till tomorrow even with the situation of the country and he has written the story for long, yet look at what is happening within our leaders.

Our plans is to have good sponsors. I used to tell people, sponsorship is not about money, it’s about connection, it’s about you introducing people to people. That is my own definition of sponsorship. It’s not about money. We have people that have equipments. We have people that have beautiful venue. If this venue want to sponsor us, they will say “Ok come and use here free of charge,” but I’m telling you.

If National Theatre can collect money to stage Duroladipo’s play, then it’s a pity. I was crying within me when our event planner said they were demanding for 500k plus to stage Duroladipo’s play. It’s a big slap. I’m still saying it. They need to refund that money, but what are we going to do if we don’t pay the money they won’t let people in, talkless of seeing this things. Even Duroladipo will be crying in his grave at the moment, that they are celebrating his 40years anniversary and they collected money for the stage, then what has he laboured for?

I had to give you this information, Duro Ladipo happened to be the first African traditional performer that got an Award for Nigeria from Berlin at the Berling festival in 1965. He’s the first person to make Nigeria proud. I went to a place in Washington DC, they called the place Arena Theatre. Duro was the first performer to have brought indigenous theatre group from Africa to perform on that stage, they placed it there live and direct at Arena Theater in Washington DC. So what are we now talking about.

If go you to University of Ibadan Theatre hall, as you are coming in you will see Duroladipo’s portrait, it was hung there. So I don’t know what people are thinking. If you go to some of the tertiary institutions, there is a particular course where you have to study Duroladipo, Wole Soyinka etc now why is it that we cannot let our younger ones know about this things. A woman saw me when I traveled to Brazil and she started shouting, paying homage, crawling on the floor.

I was so embarrassed because I didn’t even understand her language, but she was talking to a friend of mine who later told me that she’s bowing for Duroladipo not me, because in her house she has Duroladipo Shrine. you can imagine that!

Tell us about your life as Prominent man’s son?
Being a prominent man’s son have advantages and disadvantages. I’m a graduate of Political Science from University of Ibadan. When I was in U.I, I represented my father’s legacy well; I involved myself in U.I politics. I contested for a Student Union President. So everybody knew Wole Duroladipo, but still I have that passion, when I left University of Ibadan. I worked for Odu’a Investment.

I was one of their senior managers at the Premiere Hotel in Ibadan before I traveled to United State. When I got to the United State, I already made up my mind that I was going into the Art fully. So I created this company called “first eye” in first eye, we promote cultures, I called it cultural exchange. I did cultural carnival.

This year will be the 5th edition, now I’m taking it into different cities in Dallas, the 1st, 2nd, and 3rd one was in Dallas, while the 4th was in Chicago, what do I do? I create an avenue for cultural display. We have some of this kids they don’t know what they called “Oba” they don’t know what they called “Chief,” the last one I brought in Mama to Chicago, so that’s what I do every year. It’s not that I have the money but I’m so passionate about promotion our culture. I also want to start my masters on hospitality and tourism management.

How were you able to get the costumes that you are using?
Those are Baba’s costumes. We killed ram before we can wear or use that costumes, why? because when you wear that kind of costumes it changes your entire being when on stage. You saw Duroladipo, but sitting here now is Wole. Let’s be realistic Ajagunla was on stage, but Wole is the one sitting here. So when I do put on the costumes you will see Ajagunla. Let me shock you, what happened on that stage tonight, I can’t remember them again!

I have to tell you the truth. If I want to do Obakoso now it’s going to be different. Can you hear the sound of those guns? At a point, I pitied the audience but that was how it was done and it should be done. We are talking about the warriors, those characters we mentioned there are still there, Ikoyi Ile, Aresa, Olugbon, etc. they are still there, they are so rebellious because of these truth that was revealed to night.

Aresa people are still saying that Onikoyi killed their father. While Ajagunla went back to Ila Orangun. All these warriors are the ones Alaafin was using in those days to tackle his enemies. Alaafin have some warriors that are powerful than Aare Ona Kakanfo, meanwhile Alaafin too is also a warrior. When you mess with him, he’s going to call all he’s warriors to destroy you, so all this things what can we do to revive all these display of culture and originality back?

I will say, the only way is to encourage our stage performance. Look at what we did tonight. People saw reality, and originality. Look at the numbers of casts, and these people have been camped for 3 to 4 weeks now, they are not going to their houses because the director is a very strict person; he doesn’t take nonsense. Some don’t sleep for 2-3 days. So how do we get the money? It’s like struggling to make it happen. As I’m sitting here, we are talking about how to transport them, feed them, and this happen everyday. So when you see the original, let’s support it and embrace it, don’t let the zeal in them die like that. That’s my suggestion.

What is your advise to the younger ones who are aspiring to come to entertainment?
The advice to the younger ones is very simple and straight forward. If they are not interested in drama and are not ready to pass through the rigors, they should not go into it. If you are looking for money this is not your place, because you won’t get the money, but you can be fulfilled that you are doing what you like. My advice to them is to have the real passion for what they are doing.