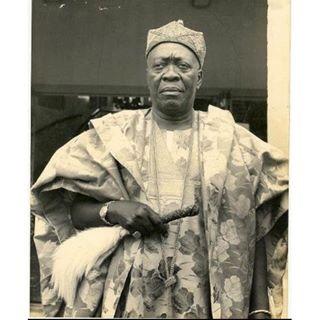 His name is big. His image looms larger than life .Although he died on 3rd July 1980 making it 40 years of his remembrance,Nigerians can’t forget Sir Adesoji Aderemi in a hurry.
The reason is simple. He was a great man in his life time.He was the one who took the Ooni stool to the great height it is today.
When many Nigerian rich men could not afford a Rolls Royce he had one.He was prosperous. He looked it.His dressing was Glamourous.
He was not only a first class King,he was the first black Governor General.
His story is very interesting. Below is the account of some of his grand children,namely Dayo Aderemi and Segun Omoworare about one of the greatest Nigerians that ever lived.Their write ups reveal the Life & Times of this great monarch.Read on.lts interesting.

Adesoji Aderemi was born in Ile-Ife to the family of Osundeyi Gbadebo and Adekunbi Itiola. His father died when he was eight years of age and he was subsequently raised by his mother. Though, it was the intention of his mother to train him in the ways of the traditional religion, her conversion to Christianity, the emergence of Christian bands at Ife and the erection of a primary school in the town influenced the religious growth of the young Aderemi.

Aderemi attended St Phillips, Ife as one of the first students in Ife to attend a local school in 1901. Thereafter, he acted as a teacher at the school, took to private studies and worked with the Nigerian railway service. While at the railway service, he started out as a staff of the Engineering Department before being transfered to the Traffic Department. He then trained as a traffic instructor where he was given the opportunity to work in various locations of Nigeria. He left the railway service in 1921 and went into a successful produce and transport business venture.

The death of Ademiluyi Ajagun on June 24, 1930 created a leadership vacuum in the ancient city that was later filled by the newly crowned Aderemi, who was installed in September, 1930. He was chosen over the lesser educated rivals, Prince Adewoyin from Lafogido ruling house and Prince Adedire from Giesi house. As Ooni, he was instrumental in the establishment of Oduduwa College, in Ife and later the establishment of two feeder primary schools. In 1947, he was a member of the Nigerian Legislative Council.

In June 1948, after responding to a request form some Yoruba students abroad for the establishment of an Egbe Omo Oduduwa in Nigeria, the Egbe or group was formally inaugurated in Ife. The group was created to unite the disparate sub-ethnic Yoruba groups. Aderemi also found himself in the midst of a disagreement between the people of Ife and Modakeke.

The disagreement arose when a Modakeke progressive union began to protest unfair charges by land owners from Ife. After some disturbances, the case was transfered to the courts but the then highest court of appeal ruled against Modakeke. However, a rival group, the Egbe Omo Ibile Ife also arose causing disturbances in the town.

Aderemi also saw himself in a long drawn battle with the Ife Divisional and District Council over the allocation of forest reserves in ife in particular the allocation of one of the 6 designated reserves to a Aderawo Timber Trading Company in which the Oba had interest. Aderemi also served as President of Western House of Chiefs and the Legislative Council of Nigeria. He served as the governor of Western Region, Nigeria between 1960 and 1967.

During colonial rule, the Ooni gained considerable amount of power due to the colonial policy of indirect rule and being labeled a first class Oba among traditional rulers in Yoruba land. The policy of Indirect rule was used to ensure native awareness and consultations about colonial policies affecting the regions. The British leaned on existing native political structures and hierarchy, particularly the traditional rulers for political consultation and tax collection.

Later on, the Ooni with the consent of the leading Yoruba political leaders used his position to close the gaps of exploitation of divisional differences among Yorubas and tried fervently to rally the Yoruba towards a common goal. In 1962, the king acting as governor, used his power to remove the premier of the region, sensing the premier did not have the support of the majority members of the House of Assembly. The event escalated the political rivalries in the region.

He was a frontline nationalist. If he had not been Oba, he would, in my judgement, have occupied a position of leadership in the affairs of the country as from the late thirties such as some of us have occupied since the early fifties. The progress of Nigeria towards independence was greatly accelerated by the motion for self-government in 1956 filed by Tony Enahoro in 1953 at the instance of the Action Group of Nigeria.

Without the mighty backing of the late Oni and the late Alake, the motion would not have even reached the Order Paper. Late Sir John Macpherson had left no stone unturned in trying to get Oba Aderemi and Oba Ademola to dissuade us from pursuing the motion. In the alternative, he had urged them to mobilize all Western Region Obas and Chiefs to oppose the move.

But the late Oni and the late Alake immovably stood their ground. The mancipation of their country was of greater concern to them than any material thing or official honour that could be gained, or any inconvenience that could befall them. When the motion for Independence was killed in the House of Representatives by the NPC’s dilatory tactics, the Action Group and NCNC members walked out of the House.

Oba Aderemi and Oba Ademola also walked out with us. Immediately after the walkout, the Oni proceeded to the Government House to tender his resignation from the Council of Ministers. And thereafter, throughout the contest unto final victory, the late Oba Aderemi did not waver even for a fleeting moment. When the big test came that is, when Sir John (Macpherson) tried to divide our ranks by ominating the late Oni to the Council of Ministers to the exclusion of Bode Thomas and others, the late Oba Aderemi voted against himself with the same determination and defiance as all of us in the Joint Session of the Houses of Chiefs and Assembly did. In the end, thanks to his steadfastness, we had our way.
The late Oni of Ife was a valuable member of all the Constitutional Conferences which ushered in both the Macpherson Constitution in 1952 and the Independence Constitution in 1960. Strictly speaking, Oba Aderemi could be described as a socialist proselyte of the gate. He abhorred violence no matter the merit of its objective. He held the view that anything obtained through violence or bloodshed would not endure.

He detested the term socialism. But he passionately believed in equal opportunity for all; and never lost a chance in participating actively in anything that would bring this about, for the people of Ife, of the Western Region, and of Nigeria. Sometime in 1954 or so, the late Oni and I had a discussion. Pandit Nehru of India had declared that at the end of this century, there would only be five surviving monarchs: the king of hearts; the king of clubs; the king of diamonds; the king of spades; and the King of Britain!

The late Oni had no hesitation in agreeing with Nehru. He did state clearly, however, that if and when this occurred in Nigeria, be it in his lifetime or after, his aspiration was that his children should be among those who would manage the
affairs of the country. He must have felt gratified that though the administrative power of traditional rulers in Nigeria had been much curtailed, his own children are among those who now manage the affairs of the country.
Oba Adesoji Aderemi and I met about 39 years ago (1941)… From our first meeting, a father-son relationship commenced between him and me. In due course, we became very deep friends.

As a friend, he was the very embodiment of loyalty and devotion. As a man, he was the symbol of tolerance and mirth. As an Oba, he was the epitome of a humane and liberal ruler. Wherever he was, he diffused geniality and peace.

I never knew him in all 40 years together to be angry even once, or to speak one harsh or offensive word to any man. During all our innumerable meetings, discussions and conversations, the late Oni did not, even on a single occasion, raise any issue of personal benefit to himself. His sole concern at all times was the welfare of his dear people in Ile-Ife, and in Nigeria as a whole