Home News ‘Removal of Chapel Chaplain has nothing to do with Ambode’s wife’, Lagos State addresses Chaplain’s sack allegation
News 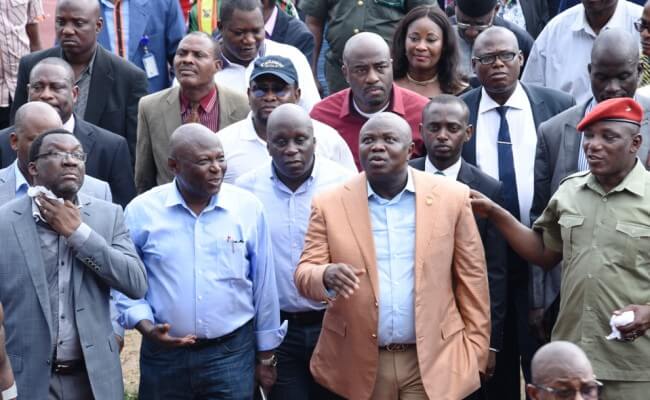 Taiwo, it was gathered, got the sack letter, without any query or official reason.

Commissioner for Information, Steve Ayorinde has however respond to the allegation against Gov Ambode,

He said, “The former chaplain had been queried a number of times in the past for conducts unbecoming of his office.

“This has got nothing to do with the First Lady. The Chaplain is looking for an excuse to cover his insouciance. It’s nothing but cheap blackmail.”

He was ordered to exit his official quarters where he lived with his wife and two children within 24 hours of receiving the letter.

Pleas from church leaders and elders failed to save the cleric, who still had two years to spend as the presiding chaplain.

Taiwo had allegedly angered the governor’s wife, Bolanle Ambode, who had visited the chapel on Sunday, May 14, when the church held an anointing service, Punch reports.

Church members were said to have filed out to receive anointing oil during the May 14 service without any preference given to Bolanle.

She was said to have later moved to be anointed and moments later, stormed out of the church in anger.

Bolanle, who was reported to be visibly angry, allegedly shunned entreaties from the women, including the wife of the presiding chaplain.

The cleric was sacked the following day in a letter dated, May 15, 2017, and signed by the Chairman, Governing Council of CCTL, Mr. Olugbenga Solomon.

A witness told the newspaper that: “The church had declared seven-day fasting after we lost two prominent members. The Sunday service, which was declared as anointing service, was supposed to end the fasting.

“Mrs. Bolanle Ambode, was present with her entourage. When it was time to be anointed, the cleric asked people to come forward; that it was optional.

“Three people stood at the stage to anoint people. They included the chaplain, the presiding chaplain and one other person.

“People started stepping out one after another. The governor’s wife, after some time, also stepped out, was anointed.

“As she stepped out, it was obvious that she was angry. The president of the women’s fellowship and the pastor’s wife ran after her. She shunned them, entered her car and zoomed off.

“When we came to the church on Tuesday, we heard that Venerable Taiwo had been sacked because the governor’s wife didn’t get the anointing oil first and she felt disrespected. The man that signed the letter is a civil servant”.

The governing council is said to be made up of members of the church and some appointees of the government.

The sacked chaplain refused to comment, saying enquiries should be directed to the church.

“One thing I can say is that I have tried as a pastor to live above board. It will not be right engaging the church or the government on the pages of a newspaper”, he said.

‘Removal of Chapel Chaplain has nothing to do with Ambode’s wife’, Lagos State addresses Chaplain’s sack allegation was last modified: May 26th, 2017 by Reporter

The Chaplain Of The Chapel Of Light Sacked By Gov. Ambode Gets Free Furnished Apartment | City People Magazine May 27, 2017 at 8:29 pm

[…] Chaplain of the Chapel of Christ the Light, Alausa, Lagos, Venerable Femi Taiwo, who was allegedly sacked by Lagos State Governor, Akinwunmi Ambode for allegedly “disrespecting his wife” by refusing to anoint her first during an […]