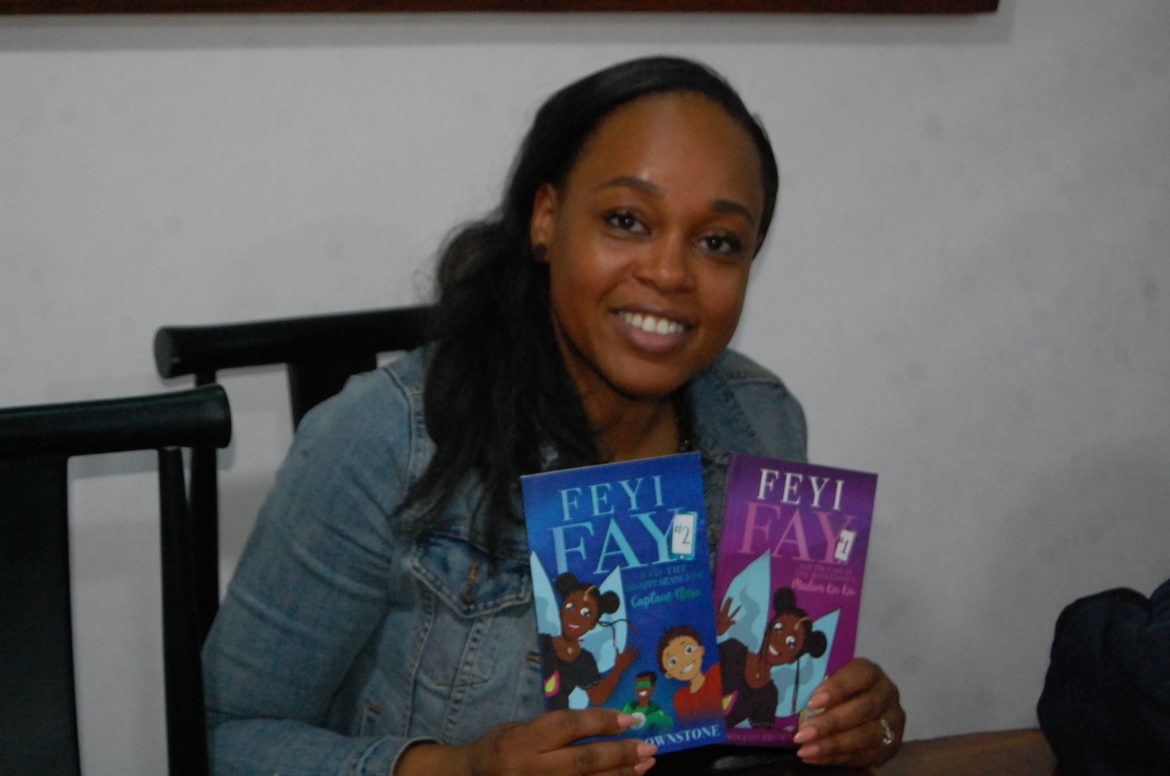 Omobola Imoisili, a US-based Nigerian writer who shot to prominence with her fictional kiddie’s book, Feyi Fay, is set to storm Nigeria for the official launch of the book and unveiling of backpacks and puzzle toys of the heroes in the book.

Feyi Fay, which is expected to make another publishing history, given the successes of its acceptance in the City of Los Angeles, tells the story of Fairy, who appears to young kids, who might be having some problems and looking for answers. Feyi Fay, who is the major character in the book, is an African replica of the popular Disney’s Cinderella, Little Mermaid, and other fantasy fairies, with a touch of African face and theme.

The gifted writer, Omobola who has been in the United States for over 15 years, becomes ambivalent about the need to promote African face, culture, and heritage after her two daughters, show the urge to know more about their history and pastime. According to her, she noticed not much has been done in the literature to feed the young ones on their origin and to educate the western world about Africa and she took up the responsibility to propagate the cause through her fantasy books.

Omobola’s first Book, Feyi Fay and the Case of The Mysterious Madam Koi Koi, was released to Los Angeles book stores, and it received wide critical acclaim and commendable feedbacks. Her second episode, Feyi Fay And The Disappearance of Captain NOSA has gained wide acceptability in schools, and homes across Los Angeles.

“The inspiration behind the book actually started with my two daughters. We live in an area where there a not a lot of black people around and as they are interacting with a lot of people from a different culture which is great. But they felt like they felt strained away and could not relate with the idea that their own is beautiful, unique and special.

“So, I decided I was going to look for things for them that will reflect African feel and represent their culture, but it’s so difficult to find those kinds of things, even in the stores; they are not many books that feature black people in them, except for a very few adolescent novels. And I noticed their attraction when they eventually see a black person in the book. They are always elated and they would say, oh, this one looks like me.’

“I also came to Nigeria to see that it’s the same thing. Even in our own country, I don’t see a lot of representation of ourselves in a lot of things that we have for kids. So I decided I was going to write a book and create another bunch of products for kids.

“So the books are very much tied into Nigerian culture because even though I wanted it to represent them physically, I also wanted to spice it up with a little bit of African culture, for the sake of other kid’s who are also way from home.

“So if you like little mermaid, frozen, lion kind and all of those Disney-modelled stories, then you can relate to what my books are like. It’s a series of book, and it’s about a world where there are these Nigerian fairies and they are responsible for helping children around the world with any kinds of problems they may have anywhere in the world and they come to rescue or guide the students from the problems, but it’s like an adventure. And they learn about life lessons and make new discoveries. And there is a little bit of Nigerian culture woven into each book. So each story in each book happens in a different country as different children call for help, but we find a way to weave in a little bit of the culture of the country in focus and Nigerian culture as the main theme in the book.

“So what we did was to take the character from the books to create a bunch of other products, and that’s where you will see the backpack of Feyi Fay and Captain NOSA to represent African culture.

“We have also produced an educational toy where you get all the pieces for a car and you’ll get to build it yourself and make it work with the ready-made solar panel manufactured for each toy. We have toys for boys and girls.

“So the main goal is to bring Nigerian culture to things that we buy for kids, in the story that we tell, and in a fun way that chidden can relate with and understand.”

She writes under the name “Simisayo Brownstone”.

MADE KUTI Talks About His Success Story