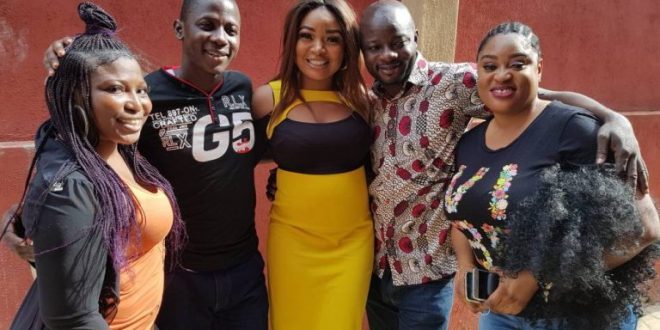 Saying that popular entertainment journalist, Gbolahan Adetayo, who was the Yoruba Movie reporter for City People Magazine has extended his chain of businesses recently after he shot his debut movie titled Aala Ife literarily means Boundary of Love is like stating the obvious.

The Ipara Remo, Ogun State-born pen pusher, officially joined the industry as a movie producer when he shot the movie in November 2nd 2017.

The latest gist now about is that, the multi-talented dude has decided to take the movie to cinema.

We gathered that come April 1st and 2nd 2017, which are Easter Sunday and Monday, Aala Ife will be shown at the National Theater, Iganmu, Lagos.

The first showing will come up by 12noon, follow by 3pm and 9pm of the two days.

If you must know, Aala Ife is a story of a young man who so much love and shows special regards for his mum. Just as he loves his wife, he also shows much love to his mother who suffers partial stroke. Unknowing to him, his wife was not in support of it. He went on a business trip and before he returned, the unexpected occurrence occurred in the family. Aala Ife is a movie to watch for the single men and women, as well as the married couples, especially those in troubled relationship/marriage. This movie actually opens your sight to the type of wife or husband to marry before you accept the proposal.

Emmanuel Ugwueke Finally Drops His New Single “You Too Special”