Why I Prefer To Operate Behind The Scene, Rev. ESTHER AJAYI’s Husband Tells City People 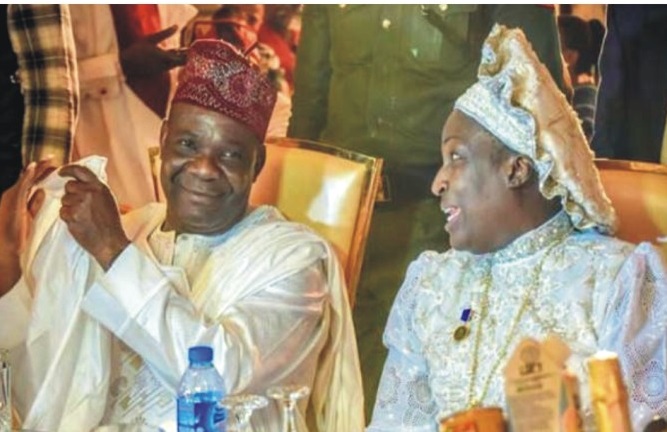 London C & S Pastor, Rev. Esther Ajayi is the founder of Love Of Christ Generation Church in London,.  She is popular not just in London, but also in Nigeria, where she founded her church. What has made her popular is because she always puts a smile on the faces of many less-privileged Nigerians through her, Esther Ajayi Foundation?

Though she has been married for over 40 years, her husband, Rev. (Dr.) Muyiwa Ajayi seems to prefer working behind the scene. Not many know who “Iya Aladura’s husband is despite the fact that they have stepped out together on many occasions.

Who is Iya Aladura’s husband? What is their love story like? That was what came to mind when we saw him walk into the Presidential Suite of Eko Hotel last Wednesday for the Media party of the annual event of the Love Of Christ Church, theme: “The Comforter”. Rev. Muyiwa, whom Iya Aladura fondly calls Brother Muyiwa bares it all in this exclusive interview with City People’s Assistant Society Editor, ABIOLA ORISILE. In this interview, he reveals how he met his wife over 40 years ago.

What is your love story like with Mrs Esther Ajayi?

We attended Ikeja Grammar School, Oshodi, in Lagos. When I was in Form 2, she was in Form 1.

It was her signature: her laughs. She always laughs. Then, I taught her Physics, Mathematics and Chemistry. So, I was almost her teacher.

Your wife is very popular, but you seem to work behind the scene, what is the reason for this?

Both of us can not be out there in public. I am at the back, giving advice and telling her what to do.

I am a lecturer at a seminary  and I am versed in the word of God.

Your wife, Esther, Ajayi, is a philanthropist, how did she develop this trait?

That is one trait that amazes me about her. She has always been like that ever since we were young. She gives and gives and I think that is why she never lacks.

What shaped her life, is she from a wealthy family?

That is what people should know. She didn’t come from a wealthy family. It is God, who is working wonders. Give and it shall be given unto you, it is the Bible that said that.

You met in secondary school, how was growing up like for her?

Yes, we met in secondary school. We fought and struggled together. We have 4 children and one adopted child. But because we rely on God, God keeps providing for us abundantly.

Why I Prefer To Operate Behind The Scene, Rev. ESTHER AJAYI’s Husband Tells City People was last modified: September 6th, 2021 by Abiola Orisile

How Technology Dreams Begin From KICKSTARTER