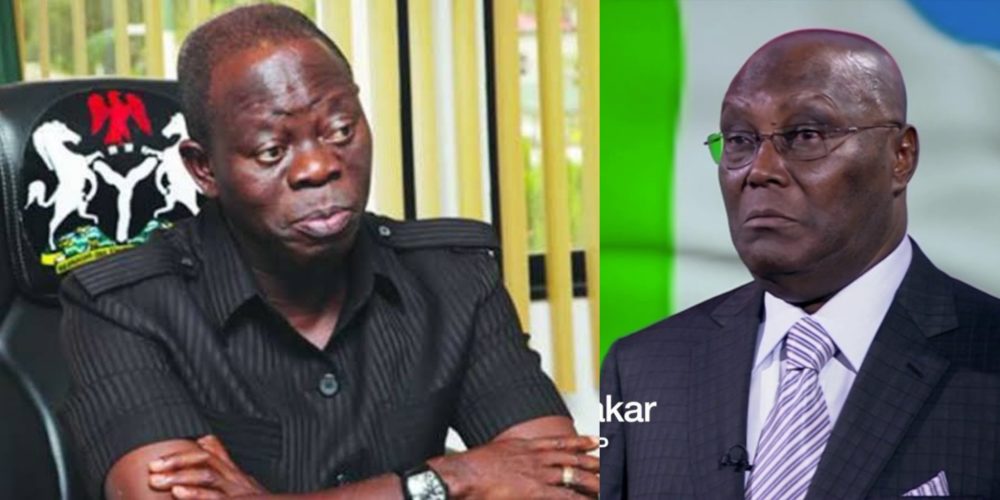 Oshiomhole, at the time, was president of the Nigeria Labour Congress (NLC).

In a tweet on Saturday, Atiku, who was vice-president to Obasanjo from 1999 to 2007, said he was the one assigned to negotiate with the NLC chairman, but his efforts were frustrated.

“The Obasanjo government in which I served commenced a phased subsidy withdrawal. I was tasked with negotiating with then NLC Chairman and current APC Chairman who stood strongly against it,” he wrote.

He added that “nonetheless, we achieved two phases of subsidy removal of fuel and complete withdrawal of subsidy of diesel before we left office.”

The decision to remove the subsidy and increase fuel price had been opposed by the NLC under Oshiomhole, leading to series of protests across the country at the time.

Obasanjo then had maintained that it was not sustainable as the government had spent more than $1 billion on fuel subsidies to offset high oil prices.

He had promised that money from increased fuel prices would be used to eradicate poverty.

Shortly after the Petroleum Products Pricing Regulatory Agency (PPPRA) announced the removal of the price cap on the retail price of premium motor spirit (PMS) on Thursday, Atiku had said the current administration of President Muhammadu Buhari demonised him for suggesting that fuel subsidy should be eliminated.

“FG finally withdraws from the fuel subsidy and price-fixing bazaar that had been rife with corruption and stalling investments. This is something patriots have been calling for and for which I was demonised,” he had said.

In the past months, price of crude oil had fallen globally, and Atiku said the price can fall even further or go back up without notice.

According to him, Nigeria, as it stands today, does not have the funds to continue to be involved in backstopping fuel price at any level.

“And the way to go is to liberalise the downstream subsector and not fix prices as long as the marketers can import on their own and sell,” he had said.