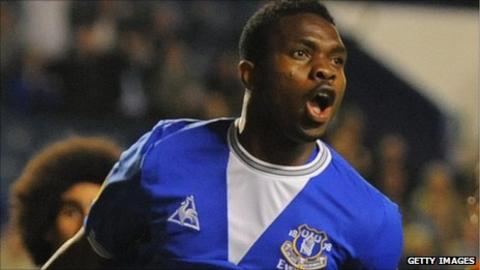 Joseph Yobo has revealed he snubbed a potential move to Juventus and Arsenal to join Everton because David Moyes promised to make him one of the best defenders in the world.

The 39-year-old stated the former Toffees boss watched him play for Nigeria in a 2002 pre-World Cup game against the Republic of Ireland, where he impressed against Roy Keane’s captained side.

The defender went on to make a significant impact for the Super Eagles at the global tournament, setting up Julius Aghahowa for Nigeria’s only goal in the competition against Sweden.

His eye-catching display reportedly generated interest from Italian giants Juventus and Arsenal, who were keen to add him to their ranks.

Yobo, however, joined the Goodison Park outfit from Marseille in the summer of 2002, initially on loan before the deal was made permanent.

The defender revealed he was swayed by the dreams of Moyes for Everton as well as his promise to make him one of the best in the world.

“When I was at Olympique de Marseille I played at the back with Frank Leboeuf, former Chelsea defender, so when he saw me he said, ‘Wow you are lightning-quick’ that I was strong and powerful,” Yobo told the Super Eagles media team in an Instagram chat.

“He said to me that the French League is good, that I’m playing for probably one of the biggest clubs Marseille but he thinks England would suit me so well.

“How I moved to Everton, we played against Ireland in a friendly game preparing for the 2002 World Cup and David Moyes watched me.

“That game I played in the midfield with Jay-Jay (Okocha), so we were in the middle and we played against Roy Keane, the former Manchester United captain, and I was able to make a statement in that game.

“At the World Cup, people said I was one of the best performers and there were offers from everywhere for me.

“My agent told me that we were going to England, London. I didn’t want to ask too many questions, where we were going, there were rumours of Arsenal and other teams but I went to Belgium and we took a flight and the flight landed in Liverpool.

“He told me Moyes wants to speak to me, so Moyes took me around the club, told me his dreams and what he expects from me and how good a player he wants me to be.

“Basically he wanted to make me one of the best defenders in the world, those were his words. He bought me lunch and sold the club entirely to me.

“He was a young manager, a former defender, one thing that struck me was he said he wants to make me one of the best defenders in the world, so we spoke with my agent and I decided to move to Everton but they couldn’t reach a deal that’s why it was a loan.”

On completing his switch to the Toffees, the centre-back explained he suffered an injury in a friendly which ruled him out from action for a couple of weeks but bounced back from the setback to prove his worth.

His fine showings during his temporary stay inspired the Toffees to trigger their purchase option of £1 million and the defender went on to make 196 Premier League appearances for Moyes‘ team before leaving England for Turkey to join Fenerbahce permanently in 2012 after spending nine years at Goodison Park.

“My first season with Everton was even very memorable because it was a loan deal, I had to impress to make it permanent for them to be able to pay what Marseille want,” he continued.

“This is funny, that was the first time I saw a striker tackling a defender from the back in a friendly game for Everton, somewhere in Wales or Scotland.

“I had this ball, I was in control of the ball, the striker came from behind, tackled me, that’s how I was out for about four weeks, he didn’t take the ball, he was very aggressive, I got injured in the process, so that’s how I missed the first few weeks of my Everton career.

“The season started and Everton wasn’t doing so well, I don’t know what happened but we had a good team but we were still rebuilding at the same time.

“And I came into the team, we won about four, five, six games in a row and we kept about six, seven clean sheets in a row.

“And at that point the fans voted me the PFA Player of the Month, it’s something that I appreciate so much.

“That’s how my first season started, I made my mark immediately I came into the team and then I signed a permanent deal for Everton.”

Yobo, who had 101 appearances for the Super Eagles before his retirement, is currently Nigeria national team assistant coach.