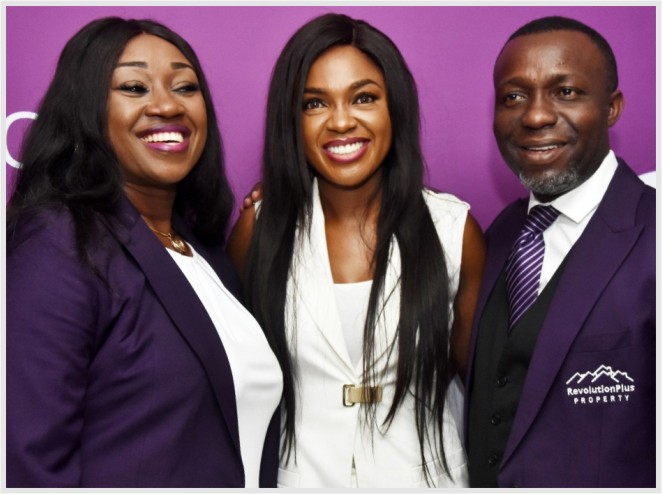 The popular actress who has acted in many blockbuster movies arrived No 1, Olufunmilayo Okikiolu Street, Off Toyin Ikeja, the office of RevolutionPlus Property around 12pm for her unveiling as the new brand ambassador. The beautiful actress arrived the venue in company of the Executive Director, Mrs. Tolulope Onalaja.

But while waiting for this beautiful actress, Dr. Bamidele Onalaja, who is the MD/CEO of the firm explained why RevolutionPlus Property has become the No 1 Real Estate Firm in Nigeria. He said, currently, RevolutionPlus has over 35 estates in Nigeria. And gradually, the company is becoming the most popular among real estate firms in Nigeria. The company has won several awards for its affordable products and integrity among it’s customers.

He also said, the company provides mortgage loans for those who show interest in any of their property, and this enabled many to acquire their property. Another way they have succeeded in making housing affordable is their flexible payment, which allows their customers to pay over a long period of time, without interest.

During the press conference, the MD of the company, Dr. Bamidele Onalaja gave reasons why they had to settle for the star actress. He said, “I was discussing about a new ambassador to help us promote our new housing estates with the Executive Director, that who should we go for, but we had to settle for her (Omono Oboli). We also have two other names that came up, but we went for her because of her track records and also, she is scandal free! We don’t want to be identified with a brand that will negatively affect us. “I love her movies. She puts excellence in her productions. And she is very passionate about her work.”

“So, Omoni is going to bring her worth of experience to RevolutionPlus and we hope it’s going to be a big plus to us. She has also given us assurance that she would do well. We know she is a very busy actress, but we are sure she would always be available whenever we need her”.

“We hope it would not be the only this year; we would like to work with her every year and make her permanent as our brand ambassador. So, Omoni you are welcomed”. Mr. said

She said, I am so happy to join RevolutionPlus Property. I am looking forward to this partnership. I know we can move both industries together (Real Estate and Movie Industries). We are in a ‘marriage’ now. I should also commend them because they have already partnered me in my new movie, “Unfaithfuls”. And they are also partnering with other projects I am doing. This is not the first ambassadorial deal I will be getting and it is not every company that really supports your on your own journey. That is huge on the part of RevolutionPlus. I will make you proud. I will go all the way to make this partnership work. I am a sales person now. I am not just a face, but I will also be selling properties for this company. So, If you want to buy property for your family and friend, you can come to me.

According to Mrs. Tolulope Onalaja, she said “when we wanted to sign a female brand ambassador to push some of our properties, Omoni name came to mind and I am also a very detailed person. I take my time to study people. So, when her name came up, I just felt, this is just it. Everybody has been saying all sorts of things since we posted her on social media”.

“So, the comments about her has been wonderful. And I know strongly that this relationship will go very far”.

Shortly after Mrs. Tolulope gave her remarks about Omoni, the two parties signed contract agreement and she was officially unveiled as the third ambassador of RevolutionPlus Property. She now joins popular Yoruba actor, Odunlade Adekola and gospel artiste, Testimony Jaga, as brand ambassador of the firm.

City People was at the unveiling ceremony and shortly after the agreement had been officially reached between the two parties, the beautiful actress who just clocked 41, spoke to City People on how she intends to promote their products and strategies she plans to use. She said, “like the MD earlier said, because of the flexible payment they have in place, it makes it a lot easier to buy property from RevolutionPlus Property. Everybody wants to be landlord; nobody wants to rent house forever. Why it is difficult for a lot of people is because they don’t have all the money in bulk. So, once their is a plan to pay little by little, then it is easier.

She was also asked how she intends to convince her colleagues to buy property. “What I intend do is to talk to the company to get some sort of extra discounts and they can also get a longer payment plan, instead of 12 months. It is not as if we don’t make money, it is just that we don’t have a salary. Sometimes, you can just get bulk money”.

“It’s a partnership now, it’s not just about the company and me; whatever they are doing now, I am part of it to promote it and push it.