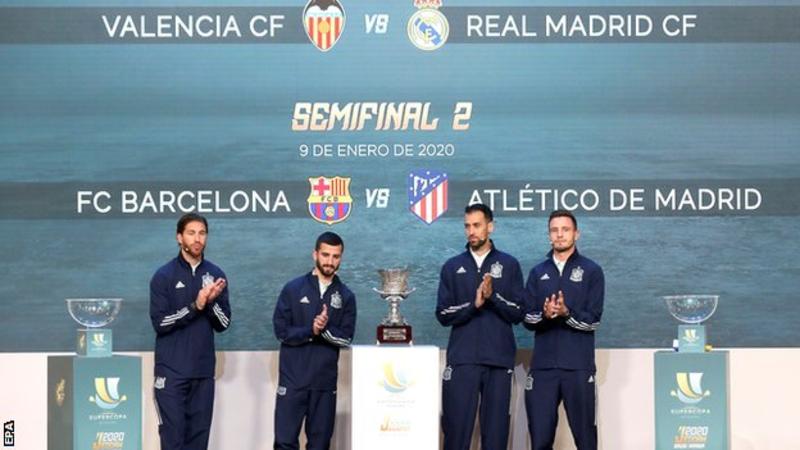 The Spanish Super Cup tournament will be played in Saudi Arabia in January 2020, the national football association (RFEF) said on Monday.

Spanish newspaper ABC said the federation would earn between £29-£34m a year from the three-year deal.

But a government official and La Liga have criticised the move.

Spain’s acting junior minister for sport, Maria Jose Rienda, said the government would not support holding the competition “in countries where women’s rights are not respected”.

Human rights organisation Amnesty International has highlighted the country’s “abysmal” human rights record. Heavy restrictions on freedom of expression and women’s rights have been raised, as has the use of the death penalty for offences not recognised as crimes under international law.

The Kingdom has sought to stage sporting and entertainment events in a bid to attract visitors and move away from its oil-dependent economy.

A ban on women attending football matches in the deeply conservative Muslim kingdom was lifted in 2017 as part of a wider easing of social restrictions championed by Crown Prince Mohammad bin Salman.

Under his rule, the kingdom has lifted a ban on women driving, eased rules on gender segregation and women’s dress code.

Some barriers remain and several women activists have been put on trial, although RFEF president Luis Rubiales said he could guarantee no restrictions would be placed on women attending the matches.

An RFEF statement said the tournament would “ease fixture congestion” and allow clubs “to be able to better plan their pre-seasons”.

“The internationalisation of the competition will increase its value and contribute to raising our visibility and improving our image ahead of our bid to host the 2030 World Cup,” added RFEF.

However, in September, former Spain women’s international Veronica Boquete heavily criticised the decision, saying it represented “the victory of money and business above sport, above everything else”.