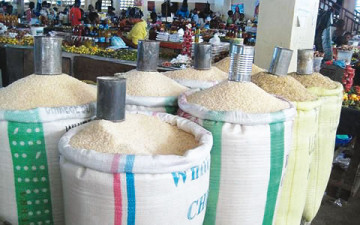 The Federal Government says Nigeria will achieve self-sufficiency in rice production by 2020 with sustained implementation of the Anchor Borrowers’ Programme launched on Nov. 17, 2015.

The Minister of Information and Culture, Alhaji Lai Mohammed, who gave the assurance at a media briefing in Lagos on Monday, said “the country has never been closer to self-sufficiency in rice, a national staple, than now.

“This has been made possible by the purposeful leadership of President Muhammadu Buhari, who has consistently said that this nation must produce what it consumes.’’

The minister recalled that the President launched the Anchor Borrowers’ Programme to provide farm inputs in cash and kind to smallholder farmers to boost local production of commodities, including rice.

He said the programme also aimed at stabilising inputs supply to agro-processors and address the country’s negative balance of payments on food.

“The result is the exponential growth in local rice production that has now moved us closer to ending rice importation.

“So far, less than 100 billion Naira has been spent on the Anchor Borrowers’ Programme that has achieved so much.’’
“Imagine that we have ploughed that money into rice production in 2008, we would have been exporting rice by now,’’ he said.

Quoting the Rice Processors Association of Nigeria (RIPAN), the minister said there were more than 11 million rice farmers in Nigeria, up from five million in 2015.

He said RIPAN’s total investment in the Nigerian economy was in excess of N300 billion while upcoming investments would amount to N250 billion.
“In 2015, Nigeria produced 2.5m MT of milled rice. By 2017, it rose to 4m MT, leaving a gap of 2m MT.

“It is important to note that the new investments were made when Nigeria was in recession, indicating investors’ confidence in Mr President and the Nigerian economy.

“The investments have not stopped as15 more mills are about to take off, including the Dangote Rice Mills to be established in six states with a total capacity of about one million MT,’’ he said.