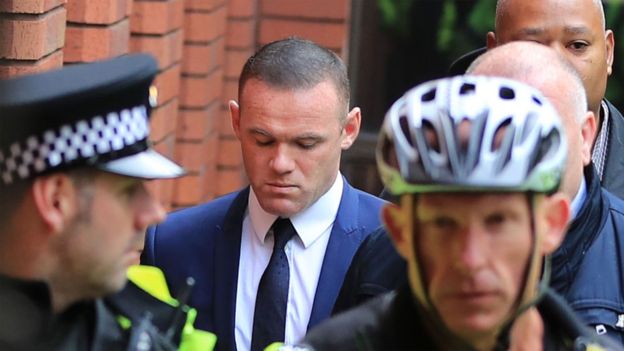 Former England captain Wayne Rooney has appeared in court and admitted drink-driving.
He was arrested when police stopped a car in Wilmslow, Cheshire, in the early hours on 1 September.
The 31-year-old was banned from driving for two years and ordered to perform 100 hours of unpaid work as part of a 12-month community order.

Rooney lawyer says his client has written letter to judge "expressing his regret & how he recognises he's let down himself, family & fans"

Rooney was also ordered to pay £170 when he at appeared at Stockport Magistrates’ Court.
The Manchester United all-time highest goal scorer with 253 was a part of the Everton side that was mauled 4-0 on Sunday at Old Trafford by the Red Devils.
The former United player returned to his childhood club this summer after losing his regular starting position under new manager, Jose Mourinho.

YOU MAY ALSO LIKE: YAR ‘ADUA FOUGHT ME, HE ENDED UP IN THE GRAVE, GEJ FOUGHT ME AND ENDED UP IN OTUEKE – GOV. EL-RUFAI

Rooney has pleaded guilty to drink-driving; his lawyer says he "wishes to express his genuine remorse for…a terrible mistake"

Rooney has only found the net once in the Premier League this season against see ex-club’s bitter rivals, Manchester City.
He hopes to help Everton give England a befitting representation at the UEFA Europa League despite having had a bad start after losing the first game 3-0.