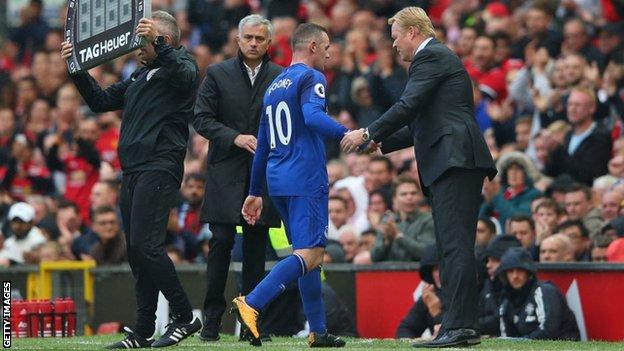 Everton boss, Ronald Koeman has denied the claims by his Manchester United counterpart, Jose Mourinho, that the Goodison Park club are aiming for “at least” the top four this season is unrealistic.
Portuguese tactician, Mourinho made the claims during his programme notes before United’s 4-0 home win over the Toffees, citing their £140m of summer spending as evidence.
But Koeman said: “Is there anybody who sees this as realistic for Everton?
“Please, come on. Fans, press – we need time.”
When asked what he considered to be a realistic target, the Dutchman said: “The same as last season.”
Everton finished seventh in 2016-17 in the 54-year-old’s first season at the club, eight points adrift of sixth-placed United.
Everton have now lost four games in a row by a combined total of 12 goals to nil and have dropped into the Premier League’s bottom three.
They have failed to score in four consecutive matches in all competitions for the first time since April 2006, including in their 3-0 Europa League defeat against Atalanta on Thursday.
Wayne Rooney is the only player to register a league goal for them, and his last was a first-half effort at Manchester City on 21 August.
“When you look at the fixtures at the start of the season, we knew we wouldn’t win them all,” said Koeman.
“We have played Manchester City, United and Chelsea away, plus Tottenham at home. Four title contenders, with the Europa League in between.
“Now we have four games at home in different competitions and we need to win. If you don’t win it is better to stop.”
Everton’s next two Premier League games are against 19th-placed Bournemouth and Burnley, both at Goodison Park.
Before that, they entertain Championship side Sunderland in the EFL Cup on Wednesday.
Koeman said: “Every manager in life has doubts. If you don’t win and you have a big number of players in your squad, you have doubts about how you need to start and the system to play. That is normal.
“I ask myself the question ‘why, why’?”
Despite his pre-match comments about the Toffees targeting a top-four spot, Mourinho did have some sympathy for Koeman and his side’s difficult start to the season.
“Everton are going to be fine but they are living a difficult moment,” said the Portuguese.
“I would not like these fixtures all together at the same time. I would like one of the top five, but all of them, that is not fair for them.”

SEE ALSO: ALEXIS WANTS TO WIN EUROPA LEAGUE BUT ARSENAL MUST DECIDE WHAT THEY WANT – CECH