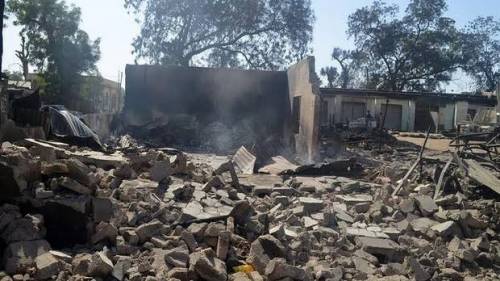 Residents of Dapchi in Yobe State have described the attack on the community on Monday as the biggest so far carried out by Boko Haram militants.
During the attack, the insurgents burnt down the palace of Dapchi District Head and the General Hospital.

An eyewitness disclosed that when the hospital was set on fire many patients undergoing treatment ran for their lives.

Since the attack, many persons have been reported missing while families have been separated and in disarray.

Dapchi rose to global prominence on February 19, 2018, when the town was attacked by insurgents, who abducted 110 schoolgirls from their dormitory at Government Girls Science and Technical College.

The girls were later released in a deal with the Nigerian Government but one of them, Leah Sharibu, was held back because she refused to convert from Christianity to Islam.

READ ALSO: HOW I BECAME THE DG OF K1’S BAND IN 1985 – GAJI OF LONDON TELLS CITYPEOPLE