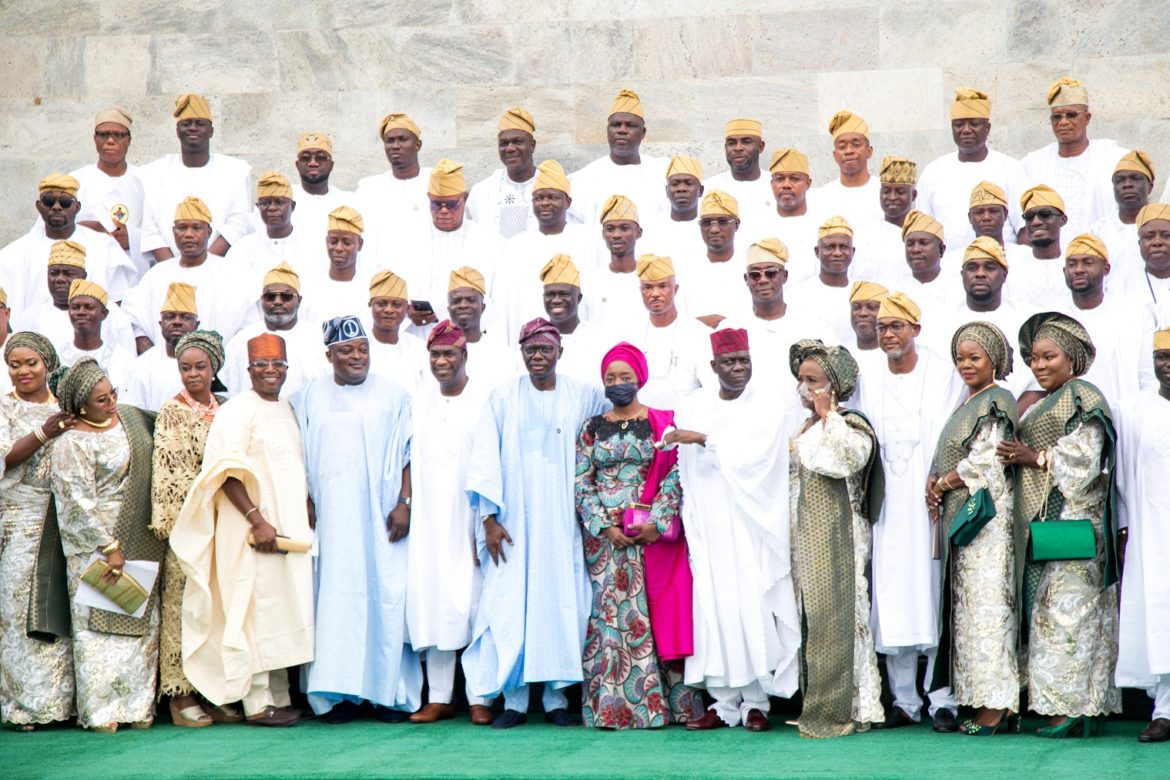 Lagos State Governor, Babajide Sanwo-Olu on Tuesday sworn in new Chairmen and Vice chairmen of the 20 Local Governments and 37 Local Council Development Areas of the State.

The governors charged the council chairmen on performance at the grassroots in order to justify the confidence the people had in them.

He stated that the electoral process which culminated in the elections that held last Saturday clearly reflected the highest standards expected from such a process, as the state witnessed the conduct of a very fair, credible and transparent electoral process in which the people freely exercised their rights to choose their leaders.

Sanwo-Olu said he was elated that the All Progressives Congress, APC, won 100 percent of all seats contested for at the LG poll, saying it showed that the party had a strong footing in Lagos.

The governor stated that the only way the chairmen could reciprocate the trust the people had in them by voting them into office, was to give their very best and ensure that the welfare and wellbeing of the people took precedence in all their decisions.

“You have been elected to serve the people and put them first in all that you do, and you have a responsibility to ensure that you do not let them down in any way or form.

“Right from your first day in office, I implore you to start thinking about the kind of legacy you would like to leave behind when your tenure comes to an end because it will surely come to an end one day. As we all know, public office is a position of trust that no one holds forever – we hold it for a time and then we pass on the baton to others.

“Let me use this opportunity to emphasize the need for continuity and progress in governance. I urge you all to ensure that you build on the good legacies laid by your predecessors, and also ensure that you surpass the legacies and the expectations of the people who have very enthusiastically elected you,” he said.

“As a result, the policies and programmes you will be implementing must be people-centric, focusing on how to improve the lives and livelihood of the people. I, therefore, implore you all to continue with the provision and facilitation of services that will directly and positively impact the lives of the ordinary people within your communities.

“You are assuming your political roles as Local Government Chairmen at a very challenging time in our national life. We are almost 18 months into the most disruptive pandemic that the world has seen in many decades, with disastrous consequences for jobs, livelihoods and economies. No aspect of the local, national and global economies has been left untouched,” he added.

Against this backdrop, he said the citizens continued to rightly clamour for and expect good governance; policy-making and implementation that would enable them to navigate these difficult times and emerge from it all on a solid socio-economic footing.

The governor added that it was the responsibility and burden of the leaders they had elected to live up to their expectations.

Sanwo-Olu said more than ever before, achieving this required cooperation among all levels and arms of government, saying that it is expected that they would work in unity with other tiers of government to bring to bear the dividend of democracy on the lives of people, in all the relevant areas, such construction and maintenance of inner roads, waste management, primary education, healthcare, security, welfare programmes touch the lives of people, among others.

“This is not to eliminate some people because of political difference but time to give all citizens good governance. This is the time for people to feel good governance. Let me assure you of our commitment at the State Government level. We will continue to provide you with the much-needed support to discharge your responsibilities,’ he added.

Earlier, Commissioner for Local Government and Community Affairs, Dr. Wale Ahmed said the chairmen’s victory at the polls, did not come as a surprise, but as a testimony to the solidity, strength, internal democracy, and unity of the APC, despite little trickles of dissent.

He said the robust party support that they all enjoyed, coming collectively from party members, vividly told the story of systemic dynamism, and deep political understanding, that always enables the APC to emerge stronger and more united, from what looked like challenging situations.

“My dear honourable chairmen and Vice-Chairmen, now you have clinched the coveted seats and work has begun in earnest. It’s important you remember that APC derives its popularity and grassroots support from its performance and constant delivery of dividends of democracy to the people.

Ahmed added that the task ahead of them was to sustain or even surpass the tempo of performance of previous administrations in their respective council areas.

“We expect that the scope of delivery by this crop of honourable chairmen and vice-chairmen would cover all sectors and sub-sectors, in tune with the THEMES Agenda of our dear Governor, Mr. Babajide Olusola Sanwo-Olu.

“You are the third-tier of government and the closest to the grassroots. You have emerged only by the will and mandate of the electorates, it behooves on you to ensure that the electorate enjoys the dividends that true democracy brings,” he stated.

Ahmed charged the council chairmen on inclusive governance, saying that in any human organization, there would always be dissenting voices based on individual dispositions and preferred choices.

“But having crossed the bridge, we remain as one in togetherness like our symbolic broom. I, therefore, enjoin all our chairmen, to carry everyone along in governance; the women; the youths and even those who supported the other camps, APC is one,” he said.

Speaking on behalf of the elected chairmen, Sesan Daini from Igbogbo-Baiyeku said the chairmen would not disappoint the governor but would work to complement the THEMES agenda of the government.

Saraki to meet SERAP, other CSOs on...