Home Entertainment I Was Scared To Tell My father I Wanted To Do Music Hip Hop Star, REEKADO BANKS, Opens Up To City People
Entertainment

I Was Scared To Tell My father I Wanted To Do Music Hip Hop Star, REEKADO BANKS, Opens Up To City People 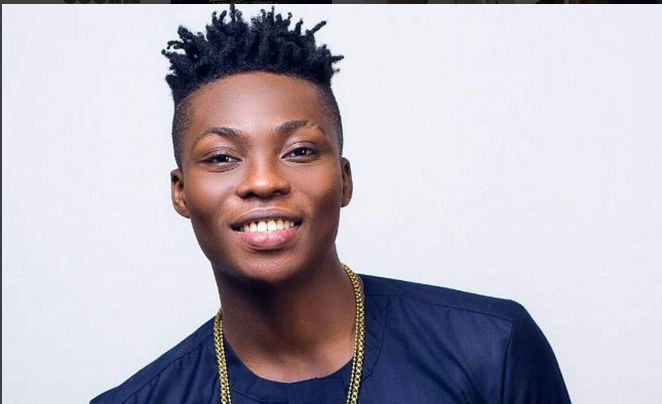 Everyone was waiting for him in the photo studio tucked somewhere inside the highbrow parts of Fadeyi area of Lagos. The photographer, the make-up guys, his stylist and this writer, were all waiting restlessly for one of Naija’s hottest hip hop act, Reekado Banks. He was running behind schedule for the photo session and CITY PEOPLE interview that had been arranged for him, but his manager, Osagie Osarenkhoe, assured everyone he would soon arrive. I was particularly apprehensive because I had been on Reekado’s tail for a while now and was scared he might ask to reschedule. A little over an hour after, he arrived in a sleek looking black Jeep. I was impressed when he climbed up the studio floor and asked to be brought to meet me at the balcony where I’d sat waiting patiently for him so he could personally apologise for coming late. We were still exchanging pleasantries when the manager noticed some ladies had sighted Reekado from across the road and warned they might have a crowd milling around the building soon if Reekado didn’t get inside and away from public glare. That is what happens when you’re an award winning music sensation enjoying back-to-back hits with successful tracks like Katapot, Oluwani, Problem, etc, and your face becomes a permanent feature on television and billboards. A gold fish, they say, has no hiding place.

Solomon Ayoniyi  Hanniel aka Reekado Banks, was born into a deeply religious Christian family and is the son of a consummate preacher father. He sings contemporary hip hop and he’s making an incredible success of his art. Signed on to arguably the country’s biggest and most successful record label, Mavin Records, Reekado  Banks, who has been involved in a lot of successful collabos with dozens of A-list musicians, has been making huge waves and enjoying massive acceptance following a string of hits and awards that have earned him his super star status. Without a shred of doubt, Reekado Banks is well on his way to making a phenomenal success of his career. Surely, we’re looking at, possibly, Naija’s next big thing as far as contemporary hip hop is concerned. CITY PEOPLE WALE LAWAL, got Reekado Banks to share with us his success story…

Tell us, Reekado, how has the journey been so far?

Yeah, everything is fine, we bless God.

Yes, it does look like everything seems to be falling into place for you, but it definitely couldn’t have been smooth sailing all the way..

Well, we’re always working. Presently, I’m working on another single that should be ready to drop soon. That is why I am here for the photo shoot so we can have pictures to promote the work when it’s out.

You have enjoyed a phenomenal rise to stardom, how do you feel about your success?

We thank God. We try to work hard but sometimes it’s not just about hard work alone, you also need the grace of God. So, I thank God for everything.

Share with us a bit of your story before you hit stardom. What were you doing before now and how hard was it getting your big break?

Before I got signed officially to Mavin, I was just like any other regular guy. I was in school, the University of Lagos, and I was doing my music. It was like a 50/50 thing. If there was one I needed to drop for another, I usually did. Although it affected me at some point, but the end goal was what I was looking at and I’m glad I got what I wanted. It was just the normal school boy stuff, doing my music and trying to get signed on to a label and when it came, I didn’t think it was going to be as big as Mavin. All I wanted was to get my voice out there so I could be heard, but I thank God for how things turned out. Yeah, it wasn’t easy, but thank God it’s turned out well.

Your hit tracks, ‘Katapot’, Oluwani, Problem, have all enjoyed massive airplay and became an anthem of sorts. A lot of your fans can’t just get enough of you. What’s the inspiration for you?

My songs basically all come with a message. Katapot, for instance, the song basically talks about love. It talks about the resilient spirit in all of us. Aside from the fact that it talks about love, it relates to life in general. The song basically tells us that people will definitely try to come against you when they see you’re doing something remarkable. They will try to stop that good thing that they see coming from you, but you just must not give up. The video totally explains the fact that there is no smooth journey in life. Nobody has had it smooth all through life, nobody. Not even Jesus had it smooth. So, that’s the message of the song and it’s almost similar to what Oluwani is preaching as well. It’s all about love, hope and resilience to make it through in life.

Let’s rewind a little bit. Tell us about childhood. What kind of young boy were you? And did you always know you were going to be where you are today?

(Smiles) I was just a normal street boy. Okay, I am a pastor’s child, so the younger years of my life were spent in the house. It was house, school, church, in that order. I didn’t have that much freedom to mix and have fun with my peers. But when I grew older and got into the University, I was able to mingle more with people and I guess the street side of me came out a lot more then (breaks into laughter) yeah, I’d say growing up for me was fun, but it was more fun when I grew older. Not like I partied a lot or something, but I was just slightly more exposed to things I should’ve been exposed to.

So, you didn’t get to start your musical career from the church choir like most….?

(Cuts in) I never sang in the choir, never. I think I sang just once in church and that was in the drama group.

How was it like, opening up to your father and letting him know what your aspirations were? How did he take it that you were not going to sing gospel but R&B?

Well, I believe God made it so easy for me. First of all, I am the last child of six children. At that point in my dad’s life he didn’t want to decide what his child should become because he had decided for some and there have been places he made mistakes and there have been places they made mistakes. So, he just felt it was better to let me do whatever I wanted to do. I remember the day I told my Mum and my mum told him, he didn’t have any problems with it. He was even the first person to make a studio for me and my brother, although he never heard anything we were doing. So, that was how it started, and my dad wasn’t tough on me about it. He advises me and tells me not to change from the good boy I was and to always remember the child of who I am..and I’m doing just that.

Now that there’s this transformation from the young, homely pastor’s son to the one that’s been thrown right there into the public glare, how does this make you feel? How do you cope with the fact that you no longer have a private life?

Believe me, nothing has really changed. I still wear my normal Polo, I wear my normal Jean. Everything still remains the same, aside from the fact that I can’t just walk around like I used to. I can’t stop to buy things like I would want to. I won’t be allowed to be seen in any type of place that’s deemed unsuitable for me. Aside from these, I still live my normal life, I still eat my sugar cane ever y day. You could say my life has changed, but life around me is still the same.

Your relationship with Don Jazzy, how would you describe it? What kind of boss would you say he has been?

First of all, I think Don jazzy is just an amazing human being. He is talented. No, I don’t think that’s accurate. If People can say I’m talented, then I cannot describe Don Jazzy in same manner. He’s super amazing when it comes to leadership. It’s not easy controlling a dynasty that has several talents and then he makes every one of these talents everybody’s favourites, that’s one quality that not everybody has. His capabilities are amazing. I don’t think he even knows how amazing he truly is sometimes. Hmm, he bad sha, I swear.

How hard does he often push you guys to bring the best out of you?

First off, I wouldn’t like to say how hard, I will just like to give a few examples. For the new three, that’s myself, Korede, Di’ja, we’ve been here in just a couple of years and I want you to help me analyse these facts: within our first year of getting here, we’ve done shows around the world individually, not just as a group. In just a little over our first year, we have had incredibly large fan bases, and I’m being honest with you, such that today, you can’t even begin to imagine what our fan bases have grown into. You tube views run into several millions and all of these three have all picked up one major award or the other from all over. So, you look at the stats, I honestly don’t know what else to say.

I Was Scared To Tell My father I Wanted To Do Music Hip Hop Star, REEKADO BANKS, Opens Up To City People was last modified: June 13th, 2017 by Wale Lawal

MAYORKUN FIRES BACK AT BURNA BOY