Seal – Singer is in Nigeria, pays visit to the Afrika shrine 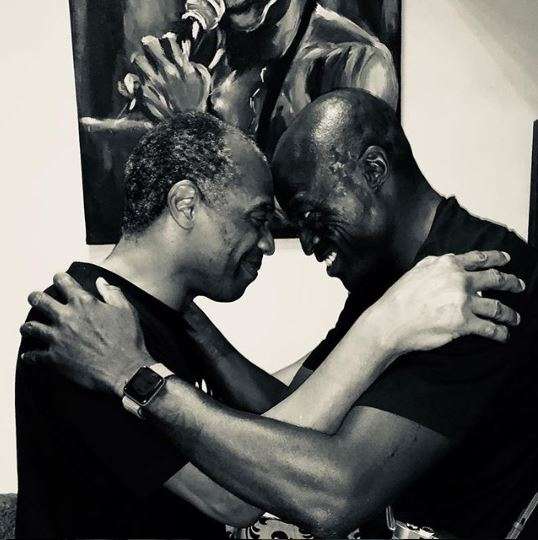 Seal pays an unexpected visit to Nigeria with a quick stop over at the Afrika Shrine.

British-Nigerian born singer, Seal is presently in Nigeria in a private trip but also took out time to visit the Afrikan shrine.

The patriarch of the Kuti dynasty, Femi Kuti took to his Instagram page on Thursday, August 23, 2018, where he shared photos of the singer and his family.

“My Brother Seal came to visit us at the Shrine #❤️#  #✌  #onepeopleoneworld @Seal #Seal @madekuti #Afrobeat #NewAfrikashrine,” he captioned one of the photos.

Photos of Seal’s visit first emerged when he was spotted at a highbrow hotel where he went to have dinner. Seal whose original name is Henry Olusegun Adeola Samuel is one of the biggest singers of Nigerian descent.

Back in 2015, Seal welcomed a child with girlfriend, Erica Parker. Prior to dating Erica Parker, Seal was married to supermodel, Heidi Klum and they have four children from that union. Heidi Klum filed for divorce in 2012 which later became official in 2014.

Seal during one of his performances

Seal and Erica Parker with their kids

Back in 2015, Seal was said to expecting his first child with then new girlfriend Ericka Parker According to New Idea, the 38-year-old model and mother of three have ‘already fallen pregnant’ while at the early stages of her relationship with the British singer.

The couple has been spotted on a series of tactile displays during their current holiday aboard on the Arctic P – as they sprawl the super-yacht owned by her estranged husband, billionaire casino mogul and Mariah Carey’s new man, James Packer.

Seal – Singer is in Nigeria, pays visit to the Afrika shrine was last modified: August 24th, 2018 by Igbokwe John