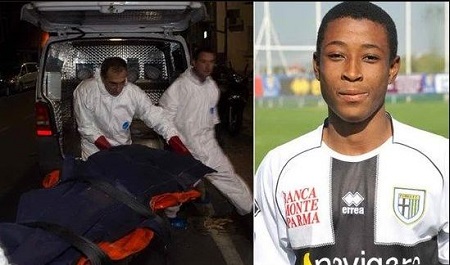 A 21-year-old Ghanaian footballer, Solomon Nyantakyi has admitted to having murdered his 43-year-old mother Nfum Patience and his 11-year-old sister, Magdalene, after he was picked up by the Police trying to escape the crime.
According to GhanaWeb, the young man disappeared immediately after the incident and was untraceable by phone moments after the double murder, the chief suspect said.
His brother, Raymond Nyantakyi, 25, gave the alarm after Solomon’s phone could not be reached. The boy was tracked down and stopped at the c 21,by the police in Milan for the double murder in Parma, he was suspected right away.
According to Police investigation, both mother and daughter were killed by knives. The former promise of Parma FC and a family member of the deceased persons, admitted the killing of both mother and daughter.
The tragedy occurred in an apartment on the sixth and last floor of a building near Parma station, in the multi-ethnic district of San Leonardo. The woman, Patience Nfum, originally from Ghana, was 43 years old. She had arrived in Italy many years ago, where her eleven-year-old daughter was born, who had just finished the first medium.
Nyantakyi the father of the family was in pain after he arrived in Parma at the police station. The husband of the murdered woman and daughter had moved to London due to work for about a month and a half, having been an employee for 15 years in a company of gastronomic products at Parma.
He decided to try his luck in the British capital and had it not been the sad incident, his desire was to transfer the whole family to England.
See the Ghanaian Footballer Who Killed His Own Mother and Sister (Photos) was last modified: July 13th, 2017 by Arinze Ago