See How Villagers Worship This One-eyed Goat in India (Photos) 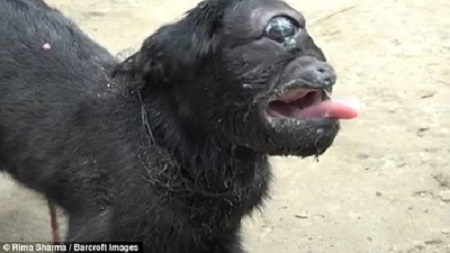 A one-eyed goat has turned an instant sensation, as its unusual physical defect has caused it to be worshipped by villagers in an Indian village.

Villagers in Assam, India were astounded on 10 May when a goat gave birth to a one-eyed offspring.
At the time, vets predicted that the blind goat, which also has only one ear, would die within a few days but it is still going strong and large numbers of people have been visiting the village to see the goat. Villagers believe the goat is sacred, with some locals beginning to worship the animal.

‘I was shocked. It’s like a miracle and people have been coming to our place to see this baby goat.’ The owner immediately called vets to check on it when it was born. He said: ‘They told me it will die in a few days but that was not true.’
‘It’s my responsibility to take care of the baby goat. I have been feeding him like a normal goat.’
‘It might be something from God that the baby goat was born in our house.’
‘So many people are coming to our place to see this baby goat. We are happy that it’s making us famous.’
The goat suffers from a congenital condition known as cyclopia, it occurs when the left and right hemispheres of the brain do not separate as they are meant to early on in pregnancy. This leads to the formation of a single central cavity with one eye, or sometimes partially fused or separate eyeballs. Other animals including horses, pigs, cows and cats have been known to suffer from the condition.

Creatures with the condition are normally stillborn or die shortly after due to breathing and brain problems.

See How Villagers Worship This One-eyed Goat in India (Photos) was last modified: May 20th, 2017 by Arinze Ago

[…] The extraordinary incident took place at Muzaffarnagar in Uttar Pradesh area of India. Related: See How Villagers Worship This One-eyed Goat in India (Photos) The baby cow was born with eyes, nose, and ears that resemble a human. The calf was hailed as an […]