SEGUN AWOLOWO Opens Up About His Mum, Sisi ABAH 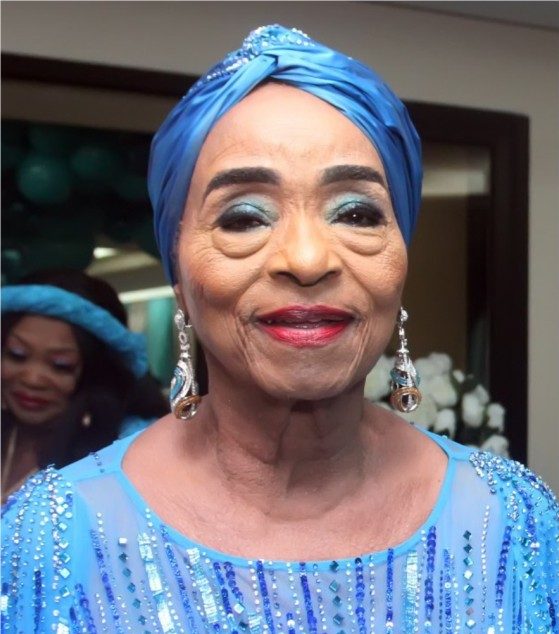 •Reveals Many Things People Don’t Know About Her

For Segun Awolowo, his late grandfather, Chief Obafemi Awolowo’s name has really put him on a hot seat that many want to be affiliated with him. Not only has his grandfather’s legacy been glowing in his path, but he has also continually put the name in gold and breaks the ceiling wherever he finds himself. He was in the news a few days ago with the superlative 80th birthday he organised for his mum, Hajia Abah Folawiyo in her palatial Ikoyi mansion in Lagos. It was an event that was attended by top personalities because Segun is a very good man. Many celebrities stormed the party in hundreds to join him in giving his mum a lovely birthday party.

For many who don’t know, Segun is the grandson of Late Chief Obafemi Awolowo, his father late Segun Awolowo (senior) was the first child of the late sage and his mum is the dainty Hajia Abba Folawiyo, popularly called Sisi Abah.

Segun and his mum share a very close bond and this was evident at the party as he was practically beside his mum, introducing people to her as well as telling her what to do. Even his mum showed closeness as she was always holding his hands and they walked together everywhere she goes. It was an enviable bond that earned both of them the admiration of everyone anytime they were sighted together.

Segun Awolowo was the host of the day and hence very busy, but City People Society Editor, TAYO OYEDIJI caught up with him though it was not an easy task, to talk about his mum as she joins the octogenarian club.

Let’s quickly quote Sisi Abah on how she described her son, Segun whom she so much loves and dots on as her only son and only child,, ‘’ He is the only child I have, so we are very close. He is like my husband, my father. He tells me what to do. Whatever he asks me to do is what I do. He loves me dearly and we interact like he is my father, not like mother and son. Whenever something is bothering me, we sit and talk about it and the same goes for him too. We are very close and he is a lovely son; very kind and caring. He’s very proud of me and I am proud of him also. And my son’s wife is super amazing. She’s the daughter I didn’t have’’.

Let’s also get to hear what Segun Awolowo revealed about his mum at 80 and how he was raised being the only child of Sisi Abah. When asked about how he feels to be hosting such a milestone for his mum he said: “I am really thrilled, I am so happy for her. I am excited she is in good health, in very high spirit and there is joy in her heart, and that is what you pray to God for and God has given this to us. She is very joyful, She is completely at peace, She is in good health, what more can I ask for? I thank God that she is witnessing this great milestone and that I am also alive to celebrate her”. On being the only child of his mum, “Well, I was never raised as an only child, so to speak and if you see her today, you will see her with her many so-called daughters so I was never raised as an only child. When I was much younger I used to harbour some little bit of jealousy that who is this one again, who is that one that is with my mum, but it has not paid out well because she has so many sons and daughter that has always rallied round her, my mum has raised a lot of people. So I have never felt like an only child”. He comes from a very large family, and he also has this to say when asked how growing up into a family man has been, having this large family, the Awolowos, his nuclear family then extended to his mother’s side, the Folawiyos? “That was how I was raised, even with my grandfather, late Chief Obafemi Awolowo, I lived with an aunt of mine, late Mrs Oyediran, we all lived with her, so this has always been what growing up looks like for many of us in the family. They say it takes a village to raise a girl but look it has taken a whole city to raise me. He also spoke on the legacy of his grandfather, “Well, That is for history to judge, it is not me but history will judge that. What I know is that I have one of the very unique grandfathers”. Segun Awolowo is such an amazing son and this shows as he puts smiles on his mum’s face and wished her well as she turned 80, “I wish her joy always and good health. We say it to her every time, you know mummy has been very lucky, she still wears high heels, when she wears flat shoes, she feels very uncomfortable, so she is very strong, we are very happy with that. We have never had any cause to be in the hospital, it is just the grace of God, and we are completely grateful for that and joyful.”

If you know Sisi Abah, you can’t really take parties away from her and her son also testified to this, “That is her, you can’t stop her, you just let her be, as long as she is in good health, she is happy, what can you do., sometimes I threaten her, I even call off the drivers, I will arrange that the drivers should not be around that this woman is not going anywhere today, but the next thing you know, you will see her, she has called another friend or somebody else to come and pick her up, so what does one do?. We rather leave her and let her enjoy her grace”.

Not only is Segun doing well as a renowned lawyer and family man, he has got a very good look and also very stylish hence you won’t need to go far, but his mum is also the doyen of Africa’s fashion so can we say like mother like son?

”I was born into fashion, so what can I do than to follow suit. I took it after her obviously”.

Born 58years ago, Segun Awolowo Jr. was the executive director of the Nigerian Export Promotion Council. He is the grandson of former Nigerian nationalist, socialist and statesman, Chief Obafemi Awolowo. Last year, 2021, he was unanimously elected as the President of National Trade Promotion Organizations (TPOs) from ECOWAS member States. He started his education at the Mayhill Convent School alongside Dolapo Osinbajo, wife of Vice President Yemi Osinbajo, all in the custody of Prof and Mrs Oyediran. From there, he proceeded to Igbobi College, Yaba, Lagos State for his secondary school education and completed his secondary school education at Government College, Ibadan. Upon completion of his secondary school education, he proceeded to the Ogun State University (now Olabisi Onabanjo University), Ago Iwoye and graduated with an LLB degree.

He worked with the law firm of Abayomi Sogbesan & Co. and also with the law firm of GOK Ajayi & Co. after his call to the bar in December 1989. He served in President Olusegun Obasanjo’s administration as a Special Assistant on Traditional Institutions, Legal Due Diligence and Legal Matters. He was appointed by the late President Umaru Musa Yar’Adua as Special Assistant and worked with the Federal Capital Territory Administration (FCTA), Abuja as Secretary for Social Development and Secretary of Transport. After the election of a new government in 2011, he went back to his law practice until November 2013 when President Goodluck Jonathan appointed him as Executive Director/CEO of the Nigerian Export Promotion Council. He is married to Bola Awolowo from the Illustrious Fowora family and blessed with successful children.

Fela Is More Popular Than Any Nigerian...