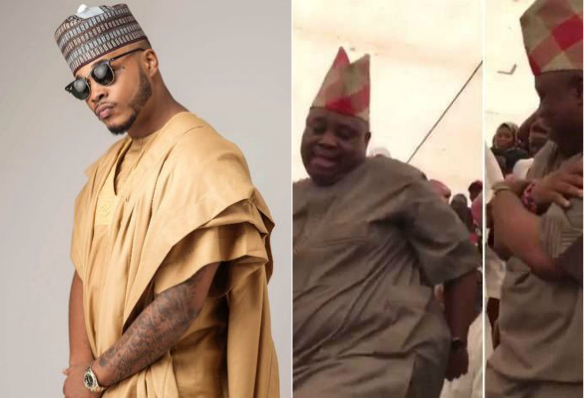 Since the dancing video of the newly elected Senator for Osun West hit the social media last week, many people have been wondering why Senator Ademola Adeleke likes dancing so much. This is because ever since the Independence National Electoral Commission (INEC) declared him the winner, he has been celebrating, and showing his dancing skills every where on the social media. He’s now been called “Dancing Senator” (on social media).

Senator Ademola Adeleke is the younger brother of the late Senator Isiaka Adeleke and is also the uncle of David Adeleke, popularly called Davido.

Unknown to many, the newly elected Senator spent most of his life in the US.

Few days back, Punch newspaper spoke to his son , Shina Rambo, who is currently in the United States about his father ’s dancing steps and he revealed that his father has been dancing since the 80 s.

He said , “When the spirit of the Lord comes upon my heart , I will dance like David danced . Ashamed? I cannot be embarrassed with the way my father danced . Look , my father will not change for anything ! He ’s been dancing since the 80s or why do you think they call him Jackson?”

The singer said that his father is probably the best dancer in their house. He disclosed that even though he has tried to compete with him on several occasions , his father always won the dance competition .

“Trust me, at every family party , we dig it out but he ends up winning because he just never stops. Jackson! Baddest , ” he said .

The singer was quick to add that even though his father is a fantastic dancer , he is also a man of wisdom.

“But don’t be misled ; he is a man of extreme wisdom who knows how to conduct himself at all times . There is time to celebrate and there is time to work . I ’m sure he will definitely do a great job serving his country to the best of his ability ,” Shina Rambo said .

The singer also took the opportunity to explain why he adopted the name Shina Rambo despite being linked with a notorious robber who terrorised Nigeria in the 80 . He said the name has not in any way affected his brand negatively .

“Actually it started as a joke. Growing up in the 90 s in Nigeria , there was a popular bandit bearing the name Shina Rambo. My name is Sina , so we joked about it a lot till the name stuck and when it was time to record my songs, I felt it just made sense because it caught people ’s attention including Davido who loved it. Many people tried to tell me to change it but Davido insisted that I should not change the name .”

How Senator DEMOLA ADELEKE Started Dancing In The US Since The Early 80s was last modified: July 17th, 2017 by Reporter