Home Weird News Shocking: See the Moment a Woman is Brutally Beaten Up With Sticks for Giving Birth to a Girl (Video)
Weird News 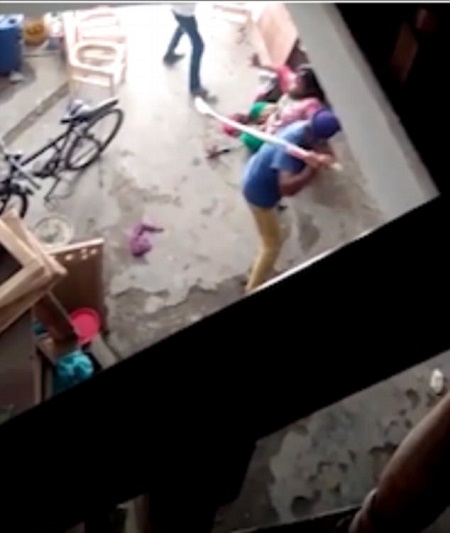 A video making the rounds online has shown the shocking moment a woman was beaten up for giving birth to a girl child.

A viral video footage has shown the shocking moment an Indian woman was viciously beaten by her in-laws for giving birth to a girl amid a dowry dispute.
In the really disturbing clip, taken from the top of a flight of stairs, the woman is shown screaming as she is lashed with hockey sticks from the front and back by two men, her brother in law and one of his friends.
According to Daily Mail UK, the victim, identified as 35-year-old Meena Kashyap, was beaten last week after her husband’s family out she had made a previous violence complaint in April, local reports say.
According to reports, the victim, from Patiala, Punjab, gave birth to a girl whom her husband’s family refused to accept and a number of beatings followed.
The pair were also involved in a dispute over 700,000 rupees (£8,300) that was given by the bride’s parents to her new husband’s family at their wedding.
A dowry was traditionally given to a bride going to live with her new husband as a means of supporting herself with her new family and in lieu of regular inheritance.
Today the system is mainly used as a means of income for the husband’s family, with additional demands being made even after a wedding, and often around the birth of a child according to the Daily Beast.
Dowries are technically illegal, as thousands of women are killed and abused over the payments each year by their in-laws, but are still widely practiced.
Charges are being brought against her husband Daljit Singh, his brother Kamaljeet and friend known as Gaurav for a number of crimes such as ‘trespassing’ and for ‘voluntarily causing hurt’.
The victim’s father told local news outlets: ‘We had complained about the issue last year itself but nothing was being done regarding that.
‘They have been married for the past two years now and have a girl child. Their family asked for 700,000 rupees for dowry.’
The incident was brought to the public’s attention when the video went viral on social media platforms across the country.
The issue of dowry, which has long been a controversial issue in rural India, has also become a hot topic since the video surfaced.
Watch the shocking video below:
Shocking: See the Moment a Woman is Brutally Beaten Up With Sticks for Giving Birth to a Girl (Video) was last modified: July 18th, 2017 by Arinze Ago