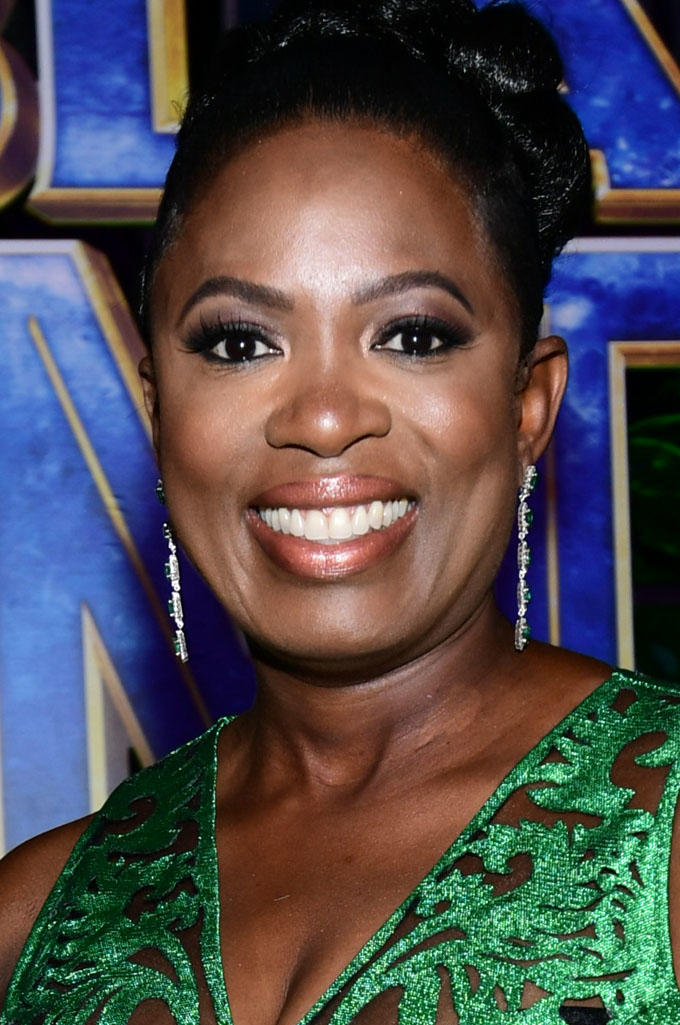 Weeks ago, Nigerians were elated to hear that a Nollywood actress had made her Hollywood debut in Marvel’s “Avengers: Infinity War”. The excitement was short-lived after it was discovered to be a so.

However, Nigeria finally got a stake in a Marvel Studios film with the release of one of 2018’s most anticipated movies, Black Panther, after Sope Aluko, bagged a major role in the film.

The movie has a historical importance because it is the first Marvel film to feature a black protagonist, a black director and a predominately black cast.

The mother of two teenage boys plays the role of Shaman, a powerful primal leader who calls upon nature spirits for aid or guidance in Black Panther. A Hollywood star, her credits include supporting roles in feature films like Identity Thief, Pitch Perfect 2, 96 Minutes and Grass Stains.She gives a bite by bite tip of the move and her part in the whole production and its impact on her.

She started by explaining the part she played in the move,” I play the role of Shaman and my teacher is Zuri, which is played by Forest Whitaker. He is also a spiritual leader like I am and counsels the king, T’Challa. I had to make sure I was fit for the role because one of my scenes that was going to involve some physical activity – I can’t say [which scene] exactly so you have to see the film. But that was pretty much all I did from a physicality point of view. And then for my role, I had to speak in a different accent. I made sure I did my research about the accent. Although we had a dialect coach, I wanted to make sure I was prepared prior to coming on set.

She further on expressed her feeling on the impact of the move on the way it would impact Africa and the world as a whole on its look on the black people, according to her ” It felt so good to finally be part of a film that really positions Africa in a positive and inspirational light. This is something that I have been waiting for a long time in Hollywood and I think a lot of black people; African and non-Africans have been waiting for (it) so I think that is the reason the buzz is so much. Black Panther is such an incredibly well put together film and it’s coming at a time when Africa is attracting a lot of bad press especially here in the US.

She further on made know to all that the Black Panther is the biggest feature film she hard  worked on and it’s incredible. “I’m just blown away by how well it’s been received. I knew it was going to be something super special with all the other actors that were on set. We all wanted to be sure we honoured the African continent in a very respectful way and I know that we did it with this film.

She also explained how a tall task it has been coming this far,” It was an extremely competitive movie set; everybody wanted to be part of the movie immediately the auditions were put out. Everybody was trying to clinch a role in the film and it’s just so ironic because I initially had auditioned for Spiderman a year ago and the (at) last minute, I didn’t get the role. My children and I were very disappointed so Black Panther came along I was like, well, Lord this is the kind of movie I really would love to star in. I actually auditioned for four roles – individual roles and different roles, and I didn’t get any of them for various reasons. I was too young or maybe too old, I don’t know. And then I got a call to audition for a smaller role, and I went to the director session with the director, LA (casting,) local casting as well as the producers for Marvel. I auditioned for the role and didn’t hear anything for a few weeks. And all of a sudden, I got a call from my agent and they said: ‘Oh, you didn’t book that role, but they have created a role for you and it’s this, and it’s a bigger role.’

I would love to work with a number of actors like Genevieve Nnaji, would be nice to work with her. You know I have seen a lot of Nollywood films. I just saw wedding party 1 and 2. I’m so excited to see, you know, we are so proud of our heritage, myself, my family and friends so it would be wonderful if I can feature in a Nollywood project so let’s just watch and see.

I would love to give back to my roots. I always believe that to whom much is given much is expected. And when I do have that opportunity to do that, I would love to do that, especially the youth
who are trying to break through into the entertainment industry. I mean, I had my own fair share of struggles while trying to break into the industry and I don’t feel we all have to go through everything like I did. Everybody’s path is different of course but I would love to be able to help in any way I can and hopefully that would come full circle at the appropriate time.