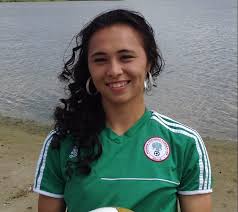 Las Vegas-born Sophis Omidiji has been handed a late call-up to the Super Falcons for the friendly game against France.

Omidiji, 20, joins the 17 players that were earlier invited by Coach Thomas Dennerby.

Omidiji has featured twice in the Nigeria U20 side, with her describing the call-up to the Falconets the greatest honour of her life.

After getting the late invite, the forward said she was honoured and proud, calling the feeling ‘indescribable.’

“Honored and Proud to have gotten a callup with the Nigerian women’s National team @thenffofficial for the friendly against France this coming Friday. Will give everything I’ve got and then some for the country. Can’t gram or tweet how this feels- it’s indescribable.

“Honored and delighted to go do battle with my sisters- all deserving and amazing players that I’ve watched over the years that have all made our country proud. Dreams definitely do come true. Just a small girl from vegas with passion for football and green white green runnin through her veins.

“Every and anybody that’s ever believed in me, said something positive about me, encouraged and motivated me and contributed to this- I thank you. Truly no words to describe the feeling but to thank everyone,” Omidiji wrote in a lengthy Instagram post.

Sophia alongside Courtney Dike are the foreign-born players in the squad scheduled for Friday, April 6 at the Stade MMArena, Le Mans, France.