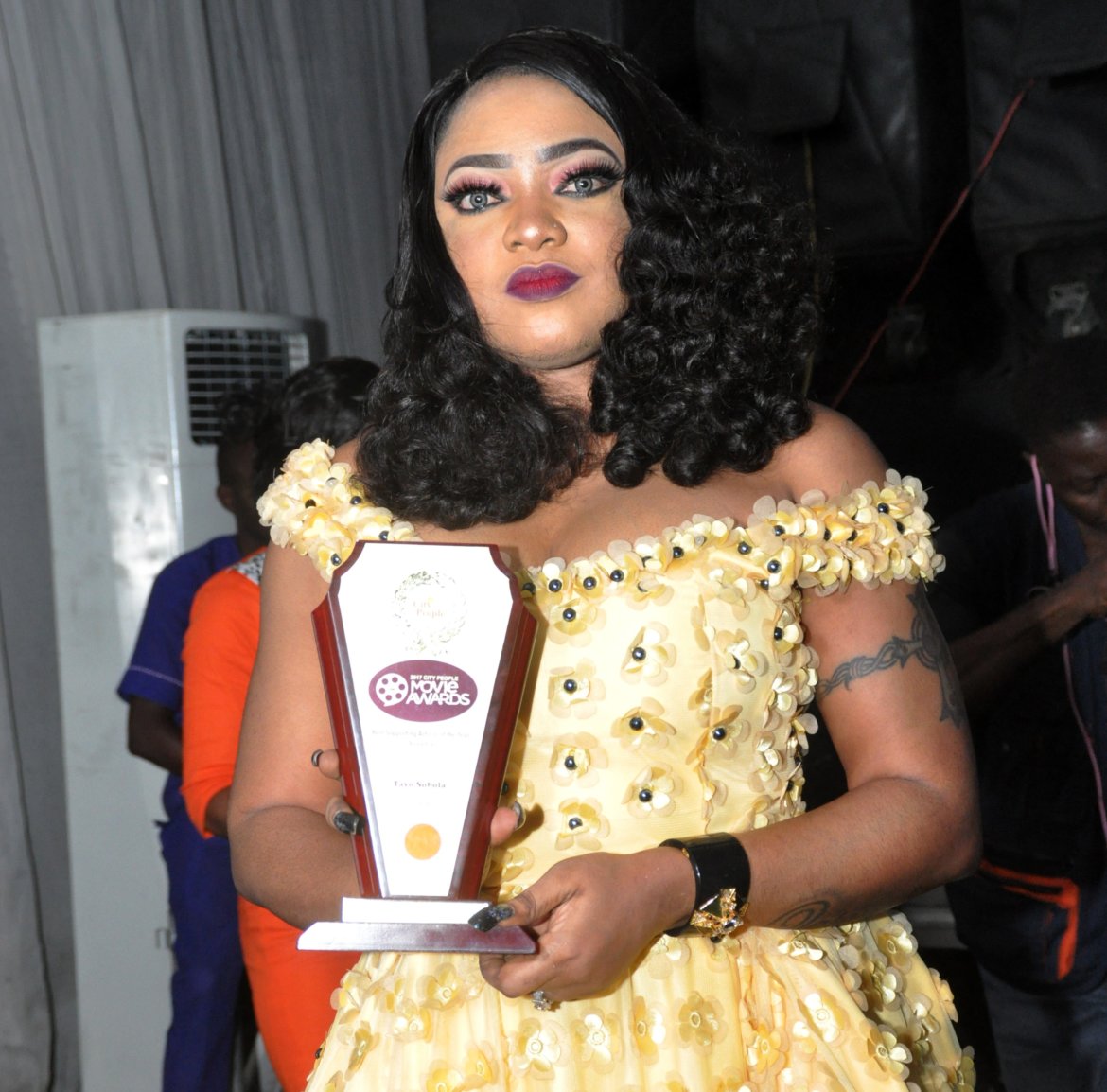 The delectable actress/producer is a lot of things in one personality. Popularly known as Sotayogaga, Tayo Sobola is one of the hottest Yoruba actress in Nigeria. She has featured in several movies such as Bella, Omoge Onijogbon, Corper Jide, Idakeji, Ife, Egan, to mention a few. She has won several awards for Best New Yoruba Actress and has been nominated for several Awards for her intelligent delivery or roles in movies.

The Ogun born damsel started as a model before going into acting. She feature in both English and Yoruba movies. Asides acting, the beautiful actress run a fashion outfit known as Clean Stitches, and an entertainment production firm known as Sotee entertainment.

In an interview with City People’s Society Reporter, TITILOPE OGUNLEYE and GBOLAHAN ADETAYO, she reveals her other sources of income and her personal issues.

You look so glowing and beautiful, can you share with us the secret of your beauty?
It is God o, it is just God that has kept me like this, his mercies and favour has kept me this beautiful.

There is this story around, that you are the richest Yoruba actress in the movie industry at the moment can you shed more light on that?

I honestly don’t know about that, I only know that I have been working so hard to meet my daily needs and help people around me.

Do you have Sotayo’s foundation?
For me, I don’t want to go about saying I have a foundation and tomorrow everybody would turn my office to one xxx meeting point, but the true about it is that I know how I reach out to my people, I don’t believe I have to come out to say to everybody that this is how I help people, but the people I reach out to knows. So I don’t think I need to blow the trumpet of everything that I do, but I have way of helping and reaching out to people in needs.

Is Sotayo successful?
Yes, I will say I am a successful person because I don’t think there is anything I have every laid my hands on that has actually gone backward or retrogress.

What really influenced the fashion business?
The truth about it is that most times, I have know myself to be this kind of person to loves to designs.
I usually go about holding pen and paper to run Sketches and even people that makes my clothes can tell that most of the times, I sketch my designs and still end up paying them for it and all that so I just decided one day that I should just try and make all these things myself. Since it just my creating my designs most times for people to make for me and that is just what I have done.

Apart from creating designs and running sketches do you also sew?
Yes, I sew once in a while not everytime. Where you once a Tailor?
No… smiles. Most time I just see them making it and try to gather one or two idea from them. So it is not like I learnt it so that is how it has been for me.

Do you have a record label?
No, we just promote and manage artiste.

You are an actress, you run Sotee Entertainment and clean stitches how do you juggle everything together?
What do you expect from a brain that doesn’t sleep. Every time I am thinking on the next thing I want to do to make money that’s why I am like that.

Can you tell us that thing people don’t know about you?
Well I look like someone that just sits and eat on the bed and money comes to meet me whenever I am sighted but honestly that is not true. I am a very hard working person even though I don’t look it. I know I look like someone who is so unserious but for those that know me they know that 24/7 my brain is calculating. I am a very calculative person so many people don’t know I work hard but I know.

So many people complain that the movies industry is not booming, as a brand Sotayo, how do you make money?
Like I said earlier, I always want to calculate one or two things that will bring me money. You don’t have to wait for millions to get into your account before you turn it into billions. You can start a small business and at the end of the day, you are making money. Whatever thing you are doing, you can always enlarge you tentacles and put your best into it, and that is why I am doing a whole lot of things that egg in one basket. I am trying different thing outside acting and I can account for everything I have because I have other resources outside acting, acting is just one of several sources.

The election is around the corner, and there is gist that one day Sotayo would contest for a political position, how true is this assertion?
I don’t know why people are saying that, I am sure you know better but for me I read Political Science in school and I have a Bachelors of Science in Public Administration. I did Diploma in Law too, so definitely I am going to make use of my certificate someday. Actually I didn’t do Theatre Art or Fashion Designing in school or some other things I am doing now but somehow some day I am going to use my certificate.

So what political position would you contest for?
I won’t say until that time, just keep your fingers crossed till then.

You are successful but someday you are going to get married, so can you share your love life?

The truth about it is that I am happy now and I am not ready to disclose my love life.

Bella was an amazing movie because so many people believed it brought you to the limelight, was it your first movie?

No, Bella was not even my seventh movie, different people with diverse opinion. So said it was Omoge Onijongbon that brought me to limelight and others says it is Bella.

What is your true definition, because people have the opinion that you are a very strict person?
Maybe I wear that look of somebody that is not accessible or approachable but I am a cool headed and easy going person. Yea I am a Principled person and I don’t like to be everywhere. I don’t’ like noisy place and I like the company of my self most time.

As a brand name Sotayo, who do you see as your strong competitor?
Nobody, I don’t see anybody as my competitor.

The Story Of BBN Naija Star, TEDDY A & His Woman

I am The Best Since Fela Died...