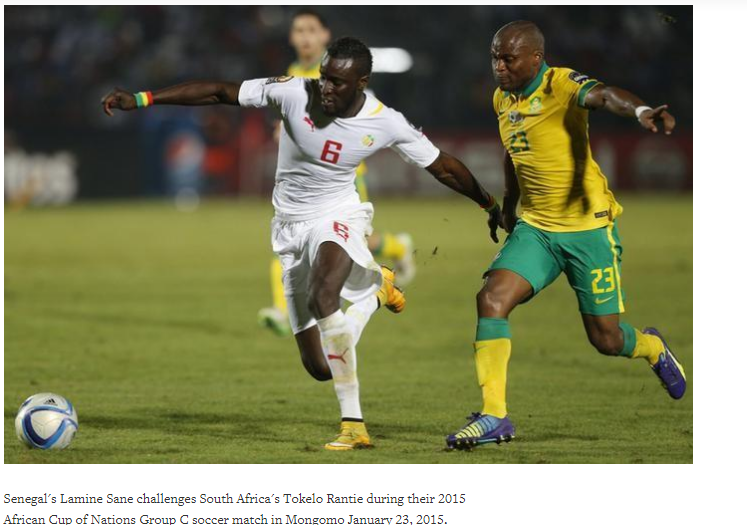 South Africa look set to launch an appeal against a FIFA decision to order a replay of last November’s World Cup qualifier against Senegal after the referee was found to have manipulated the result.
FIFA on Wednesday ordered the African zone Group D game, which South Africa won 2-1 in Polokwane, to be played again this November after referee Joseph Lamptey lost his last bid to overturn a life ban.
He was sanctioned in March by FIFA after it was found he had contrived to engineer that South Africa won the game.
No details of how he was manipulated have been given by FIFA but South Africa have denied any involvement.
The Ghanaian official handed South Africa dubious penalty for a non-existent handball and then allowed another goal to stand shortly thereafter from a quickly taken free kick while he was still ordering Senegalese defenders to retreat.
Lamptey appealed his banning and took the matter to the Court for Arbitration in Sport, who have upheld the FIFA decision, leading to Wednesday’s ordering of a replay.
“SAFA is studying the contents of the report and will issue a statement on intentions to challenge that decision,” the South African Football Asssociation said in response on Thursday.
“SAFA wishes to also state categorically that it was in no way involved with any wrongdoing related to the actions of the referee, as stated in the FIFA report,” the statement added
Previously SAFA president Danny Jordaan said ordering a replay would set a dangerous precedent.
”We will not accept it,“ he told reporters in May. ”If you must start replaying matches where referees make mistakes we will still be playing the league.
“That referee was appointed by FIFA, that is a FIFA match, it’s not our match so they must deal with their referee and that is end of story. It’s not our referee, we did not appoint him and we won the match.”
”Our position is that the referee’s decision is final. Referees make so many mistakes. Maradona scored with the hand and then became world champions.
“So many things. Thierry Henry played the ball with his hand and scored and qualified to come here to the 2010 World Cup,” Jordaan added.
FIFA will decide next week on the exact date for the replay but it will be played in the November window for internationals when South Africa are already scheduled to visit Senegal for their last group game.
By nullifying the original result, South Africa slump even further down the standings and effectively now have a single point from three matches. Senegal have five points.
Both trail co-leaders, Burkina Faso and the Cape Verde Islands, who have six points each but from four matches.
Only the group winner qualifiers for next year’s World Cup in Russia.

SEE ALSO: “HE WILL BE DEALT WITH INTERNALLY AT THE APPROPRIATE TIME” – KOEMAN RESPONDS TO ROONEY’S DRINK-DRIVE CHARGE