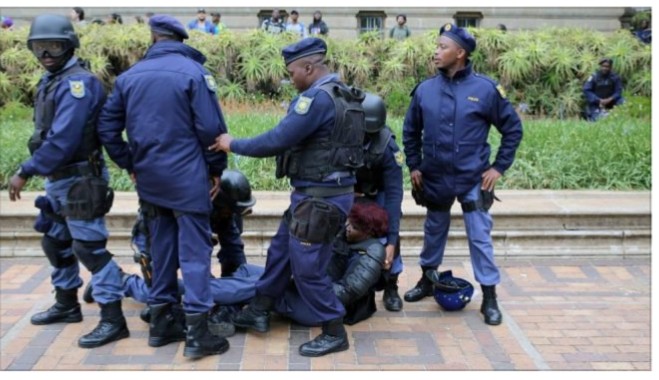 Two South African policemen allegedly responsible for the death of a Nigerian, Ebuka Okori, have been remanded in prison.

Okori was allegedly killed by two members of the South African Police Service (SAPS), on Friday.

Abike Dabiri-Erewa, senior special assistant to the president on foreign affairs and diaspora, said the Nigeria consulate in South Africa confirmed the arrest of the officers in a statement.

The consulate reportedly said consular officers from the Nigerian consulate-general in Johannesburg and the Nigerian high commission in Pretoria were in Durban to witness the court proceeding.

The accused were said to be remanded in prison custody till Monday, January 29, when the case would come up for further hearing.

The Nigerian community reportedly mobilised its members to the court where the suspects were denied bail.

Commenting on the latest development, Dabiri-Erewa appealed to Nigerians living in the affected areas to remain calm and await the outcome of the judicial proceedings.

In a statement issued by her media aide, Abdur-Rahman Balogun, Dabiri-Erewa condemned the deaths.

“We condemn in strong terms the barbaric acts and call on the South African authorities to intervene and put an end to this ugly trend,” the statement read.

“We also call on Nigerians to continue to be law abiding, as we work towards obtaining justice for the family of the deceased.”

In a related development, the consulate said investigation is on to unravel the cause of the death of another Nigerian in Rustenburg, north west province, South Africa on January 20.