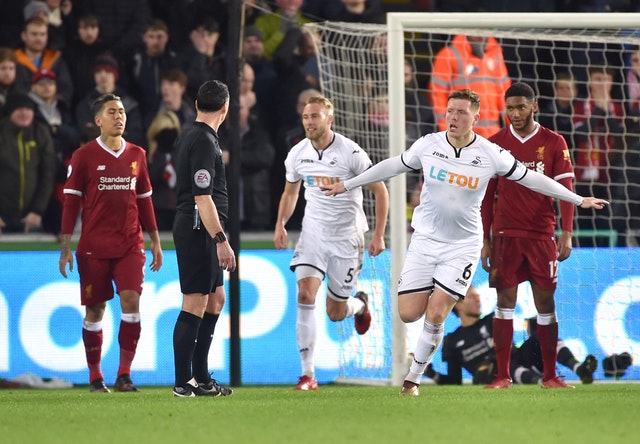 Alfie Mawson ended Liverpool’s 18-match unbeaten run by securing a surprise 1-0 triumph for the Premier League’s bottom side Swansea City at the Liberty Stadium on Monday.

Centre-back Mawson’s first-half strike gave Carlos Carvalhal his first league win on home soil since taking over as Swansea boss in December and handed Liverpool their first loss in any competition since they went down 4-1 to Tottenham at Wembley in October.

The Swans remain bottom despite the victory, though they are now just three points adrift of safety, while the Reds were unable to build on an impressive 4-3 triumph over runaway Premier League leaders Manchester City and regain third position from Chelsea, remaining fourth.

Liverpool gave £75million signing Virgil van Dijk a Premier League debut and it was the centre-back’s header that eventually fell for Mawson to sweep in the opener in the 40th minute.

Klopp’s side had plenty of chances to get on the scoreboard, Sadio Mane firing wide in first-half stoppage time and Mohamed Salah seeing his free-kick tipped over magnificently by the impressive Lukasz Fabianski.

There proved to be no way through for Liverpool, who saw Roberto Firmino hit the post with a header deep into stoppage time – Adam Lallana unable to convert the rebound – as they failed to claim a sixth straight win in all competitions for the first time under Jurgen Klopp.