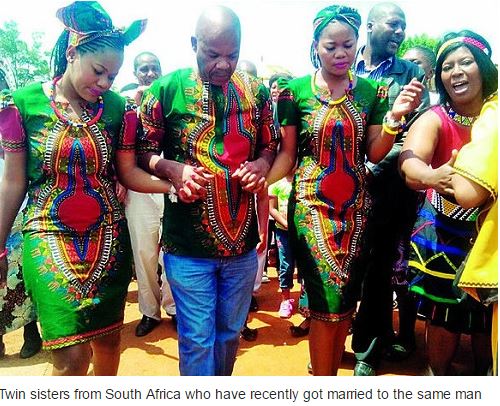 The popular South African twin sisters who got married to the same man have finally bared their minds on how the man shuttles between both of them.

Identical twin sisters from South Africa, Owami and Olwethu Mzazi who in the year 2015 got married to the same man, 53-year-old Mzukiseni Mzazi. have opened up on the motivations behind the marital decision that shocked the world. The 28-year old sisters appear proud of their decision as they granted an interview on a talk-show titled BitterSweet in South Africa. From the interview granted in their indigenous language, both parties revealed the harmony they shared right from childhood. According to them, they always shared everything ranging from food substances and others as they were alienating from the world.
They revealed the man always shuttles between them while they shared the same bed once in a while. Both ladies are currently mothers and they had babies just two months apart.
They both live under the same house but in different bedrooms without conflicts. The twin sisters appears to have married as virgins as they never dated anybody before their middle-aged husband.
In an interview with South African magazine “Drum” in 2015, the happy women revealed that they had always known that they would marry the same man.
They also added that since they were born they have shared everything else together. “We have always done everything together. We share everything. That is how our grandmother raised us. So when we decided to marry, we said any man that wants to marry one, will marry the other,” Owami said.
Watch the interview which is transcribed below:
South African Twins Marry Same Man And this Is their reason {Video} was last modified: June 3rd, 2017 by Arinze Ago

China to dispatch 395 peacekeeping force to...