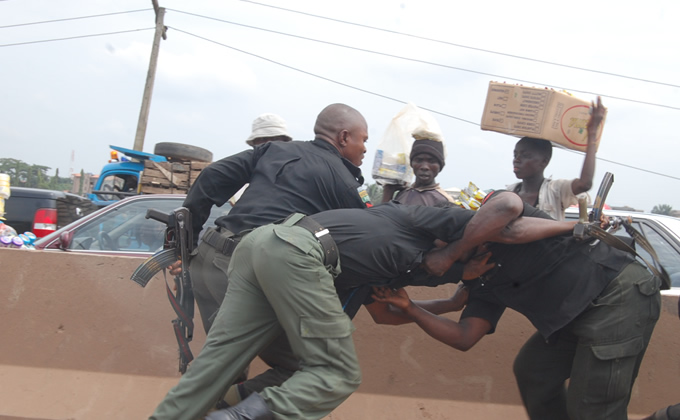 Taloskibo went on to call on the state Governor, Ambode and APC National Leader, Bola Tinubu to intervene in the situation before it gets out of hand.

Following the death and burial of NURTW chieftain and politician, Aro Rasaq Bello, AKA Hamburger in Oshodi, ‘Area Boys’ in the area have taken to the streets to call out executives of the association.

In a video clip shared online, the boys claim that NURTW executives of the association, Mc Oluomo, Koko Zaria and others, are trying to have them killed.

Speaking on behalf of the group in the video clip, Adedigba Adepegba a.k.a Taloskibo said, “We were 15, Mc Oluomo has killed 9, and they’ve said I’m the next on the list, please I don’t want to die”.

Taloskibo went on to call on the state Governor, Akinwunmi Ambode and APC National Leader, Bola Tinubu to intervene in the situation before it gets out of hand.

The NURTW boss was reportedly shot dead by suspected rival gang members during the primaries of the All Progressives Congress (APC), in Lagos State.

The State Police Command in a statement, said Bello who was the Lagos State Treasurer of Tricycle Operators, a branch of NURTW, was murdered in the Shogunle area of Oshodi on Monday, May 29, 2017, when violence broke out at the venue of the primary at Shogunle town hall.

The death of Hamburger who was recently installed as the Akinrogun of Shogunle, led to violent clashes in the area as cars were burnt by his supporter who also stormed the home of Golden and allegedly killed his aged mother when he was nowhere to be found.