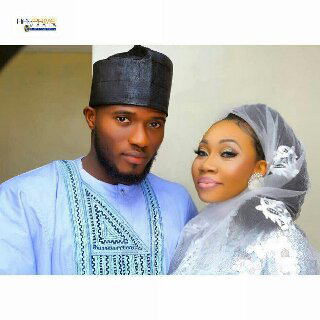 +Details of Their Nikkai & Church Wedding
Barely 8 months after things fell apart between star actor, Sholagbade Mustapha and his baby mama, Dewunmi Fatai, who is also a popular make-up artist in the Yoruba movie industry, the talented actor, yorubamoviegist.com can authoritatively hint you, has officially got married. The easy-going Mustapha got married to an undergraduate of Benham University, London’s Morenikeji Olaniyi, in Osun State on Friday 11th and Saturday 12th August 2017.
The solemnisation of the holy matrimony started with a Nikkai service {An Islamic way of getting married} on Friday 11th August at Leisure Spring Hotel, Ede {Old} Osogbo Road, Osun State before the engagement programme followed immediately at the same venue. The Nikkai service was officiated by top Islamic clerics in the state and it was graced by big players in the Yoruba movie industry. The following morning, Saturday 12th August the church service was held at Christ Apostolic Church, Station Road, Osogbo by 10 am.
The programme lasted for hours before the reception followed at Aurara Event Hall, Iwo-Ikiru Express Way, Ring Road, By NNPC Mega Station, Osogbo Osun State. On why they did Nikkai and church wedding, Yorubamoviegist.com reliably gathered that the actor is a devout Muslim, while the bride comes from a strong Christian background.
Popular Islamic cleric, Onikijipa fed the couple with the words of Allah at the reception which was chairman by Chief Alakija. The likes of Musiliu Akinsanya and MC Oluomo, Koko Zaria, Sanni Ali, Damola Olatunji, Bukola Awotemi Arugba, Ibrahim Chatta, Kayode Adebayo,Sarafadeen Olabode, Joke Lawal, Akin Richie Kolapo, Ayoola Opatola and others were part of the guests at the star studded event.
However, in December 2016, Yorubamoviegist broke the news that Mustapha’s long time romance with his baby mama, Dewunmi Fatai, had crashed exactly six months after they got their first baby. According to sources, the 2 entertainers used to be best of friends until late 2015 when the news broke that Dewunmi Fatai was impregnated by her best friend, Lolade Mustapha. As a responsible man, we gathered that Mustapha summoned the courage to take the reasonability. After the baby (a boy) was delivered in June 2016, the actor, we learnt was  planning  to hold a Nikkai with her before things fell apart between them. Information then claimed that  both had gone their ways separate
Star Actor, SHOLAGBADE MUSTAPHA Marries BENHAM Varsity Undergrad In OSOGBO was last modified: August 15th, 2017 by Reporter

BREAKING: Iyana-Ipaja Boils as Police Clash with Hoodlums in Lagos

COURT TO RULE ON EVANS N300M SUIT AGAINST IGP, OTHERS ON WEDNESDAY

I Did Not Rejoice When I Heard...