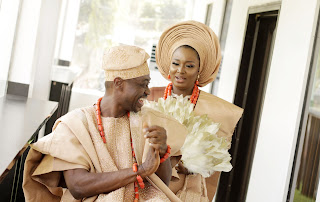 Finally, they have become one. Two big Nollywood actors, Lateef Adetola Adedimeji and Adebimpe Oyebade have officially become husband and wife.It was on Saturday,18th December 2021, amidst all the Glitz and Glamour.

Their romance had been making headlines for many months, as fans have been suspecting the lovebirds when different photoshoots began to flood the social media.
The couple also visited Citypeople corporate office at Gbagada a couple of months ago and gave no signs that the wedding bell would ring anytime soon.

But it did on Saturday,18th December 2021, when the ancient town of Ekiti hosted a beehive of Nollywood celebrities who came to witness the grand engagement of Lateef and Mobimpe at NTS Hall, under Fayose Bridge, Fajuyi Ekiti.

The groom rocked a royal brown, native attire with handmade beads on both hands and shoes which made him look like a prince, and his Nollywood colleagues who stood solidly behind him, rocking the same Agbada and headgears.

Mo Bimpe, the angelic bride equally looked elegant like a royal bride. She was escorted by a beautiful looking bridesmaid into the hall and into the warm arms of her father and mother-in-law-to-be.

Like a cultured Yoruba lady, she knelt before the father and mother of her husband are they declared good fortunes upon her life, as she begins a new journey of her life with their son, Lateef.

The event practically brought all the big names from Ekiti, the hometown of the couple’s parents together. The Adedimejis also made huge statements. They are well to do and also spent big for their son’s wedding.

One of the biggest moments at the event was the couple’s entry. It was awesome! The couple’s materrazzi line was so long that it took a while before the wedding guests could lay their eyes on the man and woman of the moment.
Lateef and Bimpe are both complementing and that made a huge difference. They took their time to walk majestically their way down the aisle. There was enough time for all the paparazzi and the couple enjoyed every bit of it.

The beautiful ambience at one of the best event centres with no more than 100 guests in attendance, as they complied with the social distance regulation.

There were hand sanitisers at the entrance of the auditorium for every guest. It was, indeed, necessary considering the coronavirus pandemic troubling the whole world at this time.

The colour of the day was royal brown and gold. Society women rocked several luxury fabrics in gold and white and matched it up with a white Aso-Ebi headgear. The colour combination made the gathering literally looked-like a gathering of angels in heaven. To say it added spice and beauty to the already well-decorated auditorium is an understatement.

One of Nigeria’s leading Owanbe band, added spice to the event as it rendered classy numbers to entertain guests all through the event. The music band serenaded everyone at the event with different genres of music; ranging from rock, afro, old school, highlife to hip-hop.

The parents of the couple beamed with joy as they joined and shared the joy of their children in matrimony. The mother of the bride and mother of the groom adorned the same exotic gold and green lace with a blend of luxury jewellery. They matched it with luxury headgear. It was obvious that the mothers-in-law are highly fashionable as they rocked luxury jewellery and clutched expensive purses. It was their day and they stood out.

The groom, Lateef Adedimeji’s grand entry was another talking point that afternoon. He wore an exotic brown Agbada his group of friends like Jide Awobona, Kehinde Adeyemi, Biodun Adebayo, Femi Apefe, Omolara Dauda, Mudashiru Gbemisola, Adewunmi Fatai, and Femi Obimodede rocked brown native attires. The groom is stylish. He rocked a luxury wristwatch and shoe. The coral beads sat so well on his neck and wrist.

He was so calm and collected. He stepped in like royalty as the band enthralled him into dancing. He was asked to greet his in-laws and take pictures with them. He complied with all the instructions of the anchor as if he had already rehearsed from home. He made no mistakes with all the questions asked and his friends were there supporting him both morally and financially. The expectation was indeed high for Adedimeji.

After the rites had been completed, he moved to a specially designed seat for the couple with his queen.

The bride, Mo Bimpe who is as fashionable as her mum, stepped out in style. She rocked luxury jewellery, shoes and bag. She stood out in style. Her friends in Aso-Ebi rocked burnt silk to match. She danced with her friends as her family members surrounded and pasted her face with lots of crispy Naira notes.