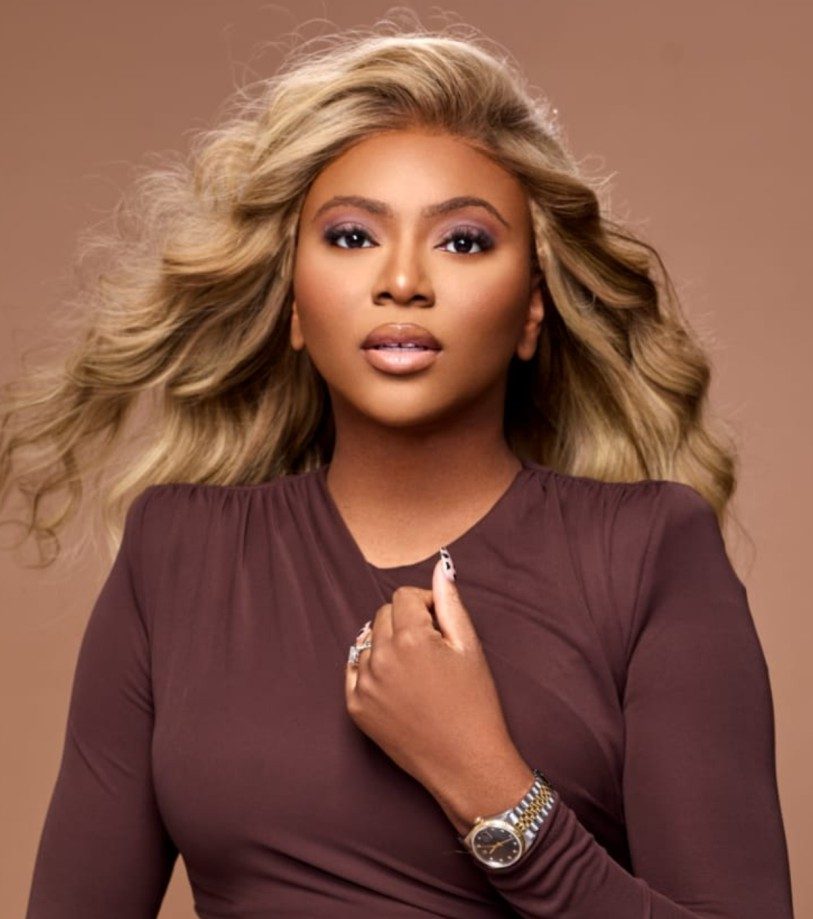 With a magnetic and infectious personality, Stephanie Coker- Aderinokun is an ambitious go-getter, whose drive and determination have enabled her to secure a place in the media world. I couldn’t help but notice this during our first meeting. She was just down-to-earth! Whilst studying Communications and Media at Brunel University, Stephanie undertook various internships with companies including, MTV, Channel Four and Media Moguls PR. In the summer of 2010, she worked in New York, as a presenter and news editor at a well-respected television corporation in Nigeria.

In 2011, she decided to relocate to Nigeria from the UK and it has been one success story to the other. She has worked with the likes of MTV Base Africa, Cool FM, Arise TV, EbonyLife TV, and Tinsel. She also co-hosted The Voice Nigeria for 3 seasons as well as the Guinness Colourful World of More Concert.

In this interview by City People’s Contributing Editor, IYABO OYAWALE (08033564055), Stephanie talks about her life, career, marriage, and motherhood. Below are excerpts:

If you were not in the talking business, what would you have been doing?

(laughs) I’ve been asked this question before and the answer is maybe I’d have studied Law because it involves talking and defending the defenceless. There are some people who cannot afford lawyers; I’d have provided my services to them. To be honest, I’ve never ever thought about doing something else.

So, you’ve always wanted to be a presenter?

Yea, I never really wanted to be anything else.

So, how did this presenting thing start?

In school, I asked my media teacher what I could do since I like talking, meeting people, and asking questions. He said I could be a journalist. When I was younger, I used to look at TV hosts, of music channels especially. I would always try and call into the shows and be a part of their competitions. I just always had this gift of the garb; it’s like when you just know how to talk. You know how to engage someone in a conversation easily and naturally. So, he said I could be a journalist and that’s where it started from. It started in secondary school.  Because I went to a Catholic school, whenever there’s a sermon or a passage to be read, I’d always be up to reading it. I always enjoyed public speaking and speaking in front of my friends. Whereas other children were very shy, I always wanted to take opportunities to practice. In University, I studied Communications and Media. In Uni, I started my own show on YouTube back then, interviewing campus musicians and talents. Yes, that’s really how it started.

With every type of recognition, it makes you feel like you’re doing something right and it was just nice to be honoured. It also shows that people are looking at you so it made me feel like I had to really improve myself because if people can nominate you for such an award, that means you’re doing something right. It also means you can do better. People are looking at you; people are looking up to you. You’ve got to think about that and also think about those who want to be like you. I just want to be the best version of myself in my field and career. I was just really excited and honoured by that recognition.

Even though you didn’t win that award, you went on to win the TV Presenter of the Year in the ELOY Awards, the same year.

I was really shocked because there were many great female broadcasters in that category and I was just like, yes, you deserve this. I felt like I did deserve that. I worked really hard at MTV. I’d do odd hours, and they’d call me in to come and do voiceovers last minute, so I really felt that I was deserving of that award. I saw it as a stepping stone. You’ve won an award now; you can actually go on to win more awards if you continue to do a great job.

I grew up in a Nigerian household but I grew up around a lot of different cultures because I grew up in England so I was very much exposed to the Nigerian culture through the music, and the food, and Nollywood. I had a lot of Nigerian friends so I’ve always been connected to Nigeria even though I never lived here before. Growing up, I have a brother so it was nice. You know back then, women and girls were pushed to do the domestic chores, so that was a bit annoying, to be honest (laughs). I always thought that when I grow up, I’ll challenge these rules. These ideologies that women should be the ones doing these things, based on their gender. That’s what I’m actually doing. Breaking the bias. Growing up was very nice and nostalgic. Back in England, going back to the schools I went to, I feel like yea, I came from here and I’m doing so well. I wasn’t born with a silver spoon even though I come from a family that has a name. The Coker family is quite prominent in Nigeria and Lagos especially and you have a lot of prominent people like the Chief Justice, Toyin Coker, he’s late now. But, I didn’t grow up with a silver spoon so I joined the hustle and worked very hard. And, I have a lot of morals that have been instilled in me. I was told some and I learned some myself. This impacted the person I am today.

Apart from presenting, you’re also an actress. How did you get into that?

So, how did you get on Tinsel?

I did so many auditions for that programme. The first time they were not sure of the role, “Oh, we’ll call you back.” They still were not sure. They kept calling me back. I kept auditioning for them. It was so strange because they wanted me to replace Angela who was a prominent character in Tinsel. I think she’s still in Tinsel. I think she went on maternity leave at that time, so, they were looking for a replacement. I auditioned about 6 times and finally, they gave me the role of receptionist. And the funny thing was I was about to give up because I was clearly frustrated and tired of all the auditions. I was not accustomed to the struggles in Nigeria and I was about to give up and return to England when the role came through. I just got a call from Tinsel and that was it.

Apart from Tinsel, what other movies have you participated in?

The fate of Alakada (the Wedding Planner) and King of Boys 2 (the series). I was also on the Hustle TV series.

What drives you as a person?

Passion. It’s definitely not the money. It’s the passion.

What has been your greatest achievement so far?

My greatest achievement would be the documentary I have coming up.

What are 2 funny things that have happened to you on camera?

Having to interview my ex was awkward on camera. The other thing was one time I was recording and my eyelashes were hanging off (laughs). I could just feel it but there was nothing I could do.

You said you have a female-led production company, can we know the name?

And what do you guys do?

We focus on telling the untold stories of women, specifically and across Africa.

What has motherhood taught you?

Patience because children really test your patience.  I also like their innocence and the fact that they stand for what they want. If they want something, you can’t really persuade them to change their mind. They speak their mind and they know what they want. As adults, we pretend that things are okay sometimes but these children do not pretend. They’re free and love everybody. They don’t discriminate.

You’ve been married for 5 years, how has marriage been?

Interesting. Marriage is not perfect but when you’re married to someone who understands you and vice versa, you’re good to go. When you love one another, you get over their wrongdoings quickly. Marriage is good when you have someone that supports your life. You grew up in different houses and if your ambition is not aligned with that of your partner, there’s gonna be a problem. For example, my husband wants to become a senator.  When I met him, he was not heavy on politics but now, I know it’s something he wants to do. And, he’s supportive of me and I should be supportive of his ambition.

Which party is he in?

Are you still on Tinsel?

Right now, I’m not on anything. I’m focused on the foundation that I have with my husband. It’s called the O.S. A foundation and we focus on bettering the lives of people in Ogun State.

Is your husband from Ogun State?

So, is he a full-time politician or he does other things?

He is a property developer.

READ ALSO: WHY SOME MUSLIMS GO INTO SECLUSION IN THE LAST 10 DAYS OF RAMADAN

ACCORD Party Locks Down OSOGBO For Dr. Akin Ogunbiyi As He Declares For Governorship

The Many Secrets Of GANI ADAMS –...